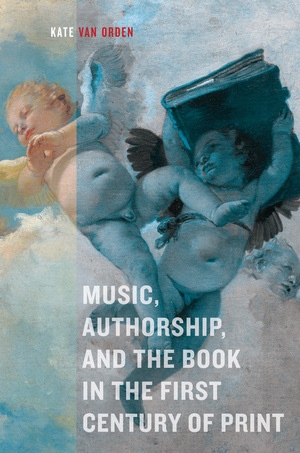 What does it mean to author a piece of music? What transforms the performance scripts written down by musicians into authored books? In this fascinating cultural history of Western music’s adaptation to print, Kate van Orden looks at how musical authorship first developed through the medium of printing. When music printing began in the sixteenth century, publication did not always involve the composer: printers used the names of famous composers to market books that might include little or none of their music. Publishing sacred music could be career-building for a composer, while some types of popular song proved too light to support a reputation in print, no matter how quickly they sold. Van Orden addresses the complexities that arose for music and musicians in the burgeoning cultures of print, concluding that authoring books of polyphony gained only uneven cultural traction across a century in which composers were still first and foremost performers.

Kate van Orden is Professor of Music at Harvard University and author of Music, Discipline, and Arms in Early Modern France (2005), winner of the Lewis Lockwood Award from the American Musicological Society.

"[Van Orden] writes with such verve and enthusiasm that her book can convey the import of her work to the general reader."—Stephen Smoliar Examiner.com

"A well-written study . . . useful reading for anyone interested in the history of publishing and the economics of music as livelihood and as a commodity."

Introduction
What is an Author?
Partbooks, Choirbooks, and Beyond
The Cultures of Print
From Mass to Chanson

1. The World of Books
Anthologies and Anonymes
The Names of Authors

2. Music Books and Their Authors
Editors and Craftsmen
Choirbooks, Masses, and Fame
The Real Stories Behind Single-Composer Choirbooks

3. Authors of Lyric
The Parisian Chanson and Composers as “Auteurs”
The Lyric Economy at Mid-Century