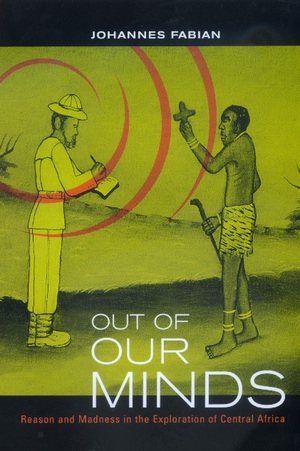 Explorers and ethnographers in Africa during the period of colonial expansion are usually assumed to have been guided by rational aims such as the desire for scientific knowledge, fame, or financial gain. This book, the culmination of many years of research on nineteenth-century exploration in Central Africa, provides a new view of those early European explorers and their encounters with Africans. Out of Our Minds shows explorers were far from rational--often meeting their hosts in extraordinary states influenced by opiates, alcohol, sex, fever, fatigue, and violence. Johannes Fabian presents fascinating and little-known source material, and points to its implications for our understanding of the beginnings of modern colonization. At the same time, he makes an important contribution to current debates about the intellectual origins and nature of anthropological inquiry.

Drawing on travel accounts--most of them Belgian and German--published between 1878 and the start of World War I, Fabian describes encounters between European travelers and the Africans they met. He argues that the loss of control experienced by these early travelers actually served to enhance cross-cultural understanding, allowing the foreigners to make sense of strange facts and customs. Fabian's provocative findings contribute to a critique of narrowly scientific or rationalistic visions of ethnography, illuminating the relationship between travel and intercultural understanding, as well as between imperialism and ethnographic knowledge.

Johannes Fabian is Professor and Chair of Cultural Anthropology and Non-Western Sociology at the University of Amsterdam. He is the author of Remembering the Present: Painting and Popular History in Zaire (California, 1996) and Time and the Other: How Anthropology Makes Its Object (1983), among other works.

"This subtle and original book is an anthropology of anthropologists, an exploration of explorers. We have for much too long looked at the records of the late 19th-century European travelers to Central Africa mainly as source material--sometimes reliable, sometimes not--about Africa. Fabian holds these visitors' accounts up to a mirror and looks at what they show about Europe's own assumptions, prejudices, and dreams."—Adam Hochschild, author of King Leopold's Ghost: A Story of Greed, Terror, and Heroism in Colonial Africa

"This remarkable book explodes all the old myths about European explorers in Africa while at the same time advancing a subtle and far-reaching critique of conventional ideas of scientific rationality. Fabian's insightful analysis of the literature of exploration provides the grounds for a provocative and very contemporary argument about colonial reason and the conditions of ethnographic understanding."—James Ferguson, author of Expectations of Modernity: Myths and Meanings of Urban Life on the Zambian Copperbelt