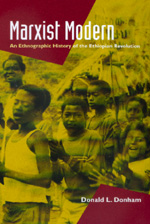 Marxist Modern An Ethnographic History of the Ethiopian Revolution

Modernity has become a keyword in a number of recent intellectual discussions. In this book, Donald L. Donham shows that similar debates have long occurred, particularly among peoples located on the margins of world power and wealth. Based on extensive fieldwork in Ethiopia—conducted over a twenty-year period—Marxist Modern provides a cultural history of the Ethiopian revolution that highlights the role of modernist ideas.

Moving between the capital, Addis Ababa, and Maale, the home of a small ethnic group in the south, Donham constructs a narrative of upheaval and change, presenting local people's understandings of events, as these echoed with and appropriated stories of other world revolutions. With the help of poststructuralist insights and theories of narrative, Donham locates a recurrent dialectic between modernist Marxism, local Maale traditionalisms, and antimodernist, evangelical Christianity. One of the most consequential outcomes of this interaction—until the late 1980s—was the creation of a more powerful state, one that penetrated peasant communities ever more deeply and pervasively.

Combining sophisticated theory with fascinating ethnographic detail, this study contributes to the theory of revolution as well as the study of modernity. In doing so, it seeks to integrate ethnography and history in a new way.

Donald L. Donham is Professor of Anthropology at Emory University. He is the author of Work and Power in Maale, Ethiopia (1994) and History, Power, Ideology: Central Issues in Marxism and Anthropology (1990) which California is presently reissuing in paperback as a companion.

"Donham's beautifully written book makes a singular contribution to the emerging literature on global modernities. Donham creatively and seamlessly weaves together an array of textual fragments that enliven and enhance his ethnographic accounts, and together produce a fascinating book and a very good read." —Charles Piot, Duke University 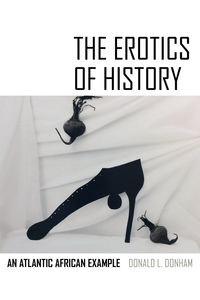 The Erotics of History