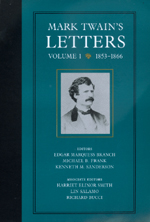 "This auspicious beginning of what may come to be regarded as one of the most important collections of letters by an American author takes 17-year-old Sam Clemens, searching for work as an itinerant printer, from Hannibal, Mo., to age 31, when, established as the writer Mark Twain in California, he is on his way to wealth and worldwide fame. During these 14 years, he travels from the East Coast to the West, working along the way as a steamboat pilot, gold hunter, newspaper writer and editor, foreign correspondent, storyteller and humorous lecturer. Wherever he settlesin big cities, Nevada mining camps or Hawaiihe writes entertainingly to his family and friends about the moods and experiences, sights and sounds he encounters. Reading these letters is like anticipating Life on the Mississippi, Tom Sawyer and Huckleberry Finn in some ways more enjoyably because of their freshness and spontaneity. Less than three-fifths of the book consists of the actual letter texts; the rest is editorial apparatus so admirably organized and set forth as to become a source of wonder to general readers and delight to advanced students of literary history. Appendixes include genealogies, maps, photographs, manuscript facsimiles and a detailed commentary. The book constitutes a major publishing venture." --Publishers Weekly

"This initial volume in the first comprehensive edition of Twain's letters (about half first published here) takes us from 1853 when at age 17, he left Hannibal to 1866 when at age 31, he was on the verge of a great career. Lively and informative, they are addressed mostly to family members and record Twain's erratic progress from Mississippi riverboat apprentice-pilot to Nevada Territory gold prospector to San Francisco newspaper reporter. The notes included are both interesting and exhaustive, and the volume as a whole provides welcome insight into the later works, particularly Life on the Mississippi and Roughing It, of a great American writer." Charles C. Nash, English Dept., Cottey Coll., Nevada, Mo." --Library Journal


"An astonishingly dull but comprehensively annotated collection of letters from an unexceptional period in Twain's life. Like the phone book, this is one of those hefty tomes you're terribly glad exists, even though there's little reason to go through it cover to cover. Its very thoroughness, its rounding up of every epistolary scrap, from bills, to perfunctory thank-yous, to itineraries of arrivals and departures, ensures vast stretches of tedium. But even when not quarreling over printing details with his publisher or setting up dates for speaking tours, Twain the correspondent bears little relationship to Twain the genius of 19th-century American literature. Even when he is corresponding with intimate friends or his beloved wife, Olivia (Livy), there is an unrevealing quality to almost every letter, as if he were deliberately resting his talent. Salamo and Smith (members of the Mark Twain Project at the Bancroft Library, Univ. of California) are to be commended for the incredible depth, range, and detail of their work. Their scholarship is impeccable, their erudition extensive--one has the feeling that they could probably account for almost every hour of Twain's life--and learned footnotes abound, often dwarfing the brief letters. During this time span, Twain embarked on building a house, suffered the death of a child, and made regular visits to England, sometimes to lecture, sometimes to bask in the warm admiration of the British. He also published his only cowritten book (The Gilded Age, with Charles Dudley Warner). But Huckleberry Finn and the full flowering of Twain's talent are still several years away. A major scholarly resource, but slow-going and unrewarding, proof of how compartmentalized genius can sometimes be." --Kirkus Review
Read More >