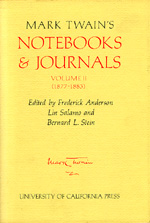 The twelve notebooks in volume 1 provided information about the eighteen years in which the most profound, even dramatic, changes took place in Clemens' life. He early achieved the limits of his boyhood ambition by becoming a steamboat pilot on the Mississippi River, a position there is no reason to believe he would have abandoned if the Civil War had not forced him to do so. In fleeing from a war which principle and temperament prevented him from supporting, Clemens entered into the first stages of his literary career by serving as a reporter for newspapers in Virginia City and San Francisco. When the restricted experiences available to a local reporter had been thoroughly explored, he moved on as a traveling correspondent to the Sandwich Islands and then still farther to Europe and the Near East. The latter travels provided him with material for The Innocents Abroad, the book that established Mark Twain as a popular author with an international reputation in 1869. In 1872 he further exploited his personal history by publishing Roughing It and in the same year visited England to gather material on English people and institutions. He returned to England the following year, this time accompanied by his family and by a secretary who would record the observations printed as the last notebook in volume 1. Volume 2 of Mark Twain's Notebooks and Journals, documenting Clemens' activities in the years from 1877 to 1883, consists largely of the record of three trips which would serve as the source for three travel narratives: the excursion to Bermuda, a prolonged tour of Europe, and an evocative return to the Mississippi River. Despite the common impulse to preserve observations and impressions for literary use, the contents of the notebooks are remarkably different in their vitality-and the works which developed from the notes are correspondingly varied.

Frederick Anderson, Lin Salamo, and Bernard L. Stein are members of the Mark Twain Project of The Bancroft Library at the University of California, Berkeley.