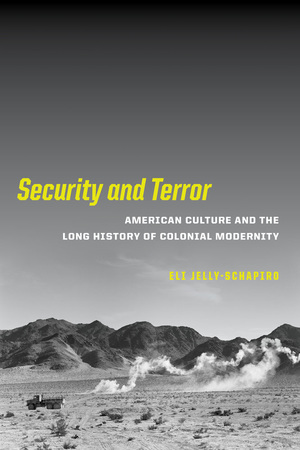 When in 1492 Christopher Columbus set out for Asia but instead happened upon the Bahamas, Cuba, and Hispaniola, his error inaugurated a specifically colonial modernity. This is, Security and Terror contends, the colonial modernity within which we still live. And its enduring features are especially vivid in the current American century, a moment marked by a permanent War on Terror and pervasive capitalist dispossession. Resisting the assumption that September 11, 2001, constituted a historical rupture, Eli Jelly-Schapiro traces the political and philosophic genealogies of security and terror—from the settler-colonization of the New World to the wars in Afghanistan, Iraq, and beyond. A history of the present crisis, Security and Terror also examines how that history has been registered and reckoned with in significant works of contemporary fiction and theory—in novels by Teju Cole, Mohsin Hamid, Junot Díaz, and Roberto Bolaño, and in the critical interventions of Jean Baudrillard, Giorgio Agamben, Judith Butler, Michael Hardt and Antonio Negri, and others. In this richly interdisciplinary inquiry, Jelly-Schapiro reveals how the erasure of colonial pasts enables the perpetual reproduction of colonial culture.

This guest post is published as part of our blog series related to the American Studies Association conference in Atlanta, from Nov. 8-11. #2018ASA By Eli Jelly-Schapiro, author of Security and Terror: American Culture and the Long …

Eli Jelly-Schapiro is Assistant Professor of English at the University of South Carolina, where he teaches contemporary literature and culture.

"With a lucid and accessible tour of political theory . . . [Jelly-Schapiro] prepares his readers for astute interpretations of several recent fictional texts and films . . .  The book is cultural studies at its best."—Times Higher Education

"This is an important, timely, and intellectually dazzling intervention. It combines exhilarating readings of a range of contemporary works of theory, fiction, and film with a combative and beautifully written presentation of the post/neocolonial conditions from which those materials have sprung. The belligerent, geopolitical unconscious of the era of endless war is anatomized here in all its appalling conceit."—Paul Gilroy, author of Darker than Blue: On the Moral Economies of Black Atlantic Culture

"Security and Terror stages a resistance: it refuses to monumentalize the attacks of 9/11 or to isolate in history the endless war that has followed. In doing so, the book puts forth a countervailing truth. In the shadow of no towers lie the ruins of our colonial past, a history of depredation. A corrective reading, necessary and illuminating."—Amitava Kumar, author of A Foreigner Carrying in the Crook of His Arm a Tiny Bomb

"In this thoughtful study, Eli Jelly-Schapiro places the War on Terror in relation to the longer history of primitive accumulation, racial capitalism, and state violence that is colonial modernity. A significant contribution."—Lisa Lowe, author of The Intimacies of Four Continents