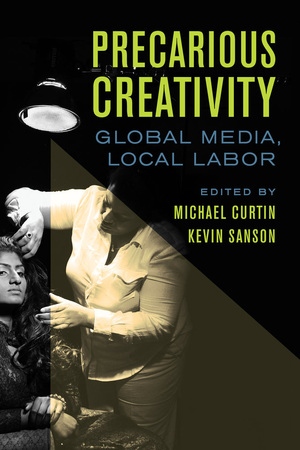 Precarious Creativity examines the seismic changes confronting media workers in an age of globalization and corporate conglomeration. This pathbreaking anthology peeks behind the hype and supposed glamor of screen media industries to reveal the intensifying pressures and challenges confronting actors, editors, electricians, and others. The authors take on pressing conceptual and methodological issues while also providing insightful case studies of workplace dynamics regarding creativity, collaboration, exploitation, and cultural difference. Furthermore, it examines working conditions and organizing efforts on all six continents, offering broad-ranging and comprehensive analysis of contemporary screen media labor in such places as Lagos, Prague, Hollywood, and Hyderabad. The collection also examines labor conditions across a range of job categories that includes, for example, visual effects, production services, and adult entertainment. With contributions from such leading scholars as John Caldwell, Vicki Mayer, Herman Gray, and Tejaswini Ganti, Precarious Creativity offers timely critiques of media globalization while also intervening in broader debates about labor, creativity, and precarity.

May Day, “International Worker’s Day,” is a curiously un-American holiday. Celebrated by labor groups and political parties outside the United States, it began in 1890 as a global day of solidarity to …

Michael Curtin is the Duncan and Suzanne Mellichamp Professor of Global Studies in the Department of Film and Media Studies and cofounder of the Media Industries Project at the University of California, Santa Barbara. His previous books include The American Television Industry; Reorienting Global Communication: Indian and Chinese Media Beyond Borders; Playing to the World’s Biggest Audience: The Globalization of Chinese Film and TV; and Distribution Revolution: Conversations about the Digitial Future of Film and Television.

“The current volume is overdue, because it not only assumes the rise of the worldwide precariat, but it also scrutinizes vastly different cultural practices, many of which have not received critical attention in any depth…. Readers of this volume will nonetheless encounter stimulating rehearsals of these new modes of creative precarity.”—Labor: Studies in Working-Class History

"Precarious Creativity provides a corrective to previous, U.S.-centric attempts to understand the global media economy by offering a bracing look at the dark underbelly of life for most media workers today. Creative labor must navigate not only the future shock of new digital media technologies and practices but also the impact of enhanced globalization, resulting in long hours, dangerous conditions, and unstable futures. The blurred distinction between amateurs and professionals, the proliferation of brand-content hybrids on streaming video platforms, and the glut of international coproductions that target non-union workers are each taking a bite out of the once potent talent guilds in the United States, while nullifying the protections once afforded by government-supported local culture industries."—Denise Mann, Professor, Department of Film, Television, and Digital Media, UCLA

"Wide-ranging, diverse, and authoritative, Precarious Creativity enlarges the terms in which we understand the changing nature of film, television, and digital media globally. Setting its task as untangling the nuances of increasingly precarious creative work across different industry sites, scales, and countries, this book succeeds in building a balanced and comprehensive portrayal of the reshaping of the contours of work and industry organization under the twin circumstances of digital disruption and a globalizing media system. Connecting working conditions and concerns of creative workers and businesses to their advocacy organizations and guilds, as well as governmental policies and initiatives, Precarious Creativity makes working lives and the perspective of work in organizations central to our understanding of and conversations about the screen media industries."—Tom O'Regan, Professor of Media and Cultural Studies, The University of Queensland


"In this timely and telling collection, Curtin and Sanson bring together top media industry scholars to consider how the consolidation of corporate control and the dispersal of creative labor are reshaping film and television production--and the labor force itself--on a worldwide scale. Every case study is an eye-opener, and no other book comes close to Precarious Creativity in assessing the plight of creative workers in the era of global conglomerate Hollywood."—Thomas Schatz, University of Texas at Austin
Read More >