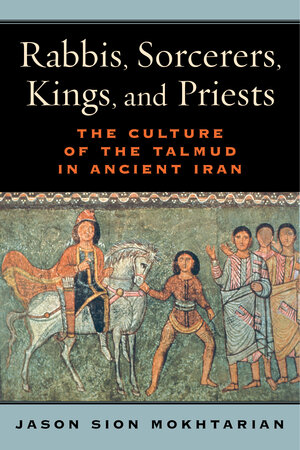 Rabbis, Sorcerers, Kings, and Priests The Culture of the Talmud in Ancient Iran

Rabbis, Sorcerers, Kings, and Priests examines the impact of the Persian Sasanian context on the Babylonian Talmud, perhaps the most important corpus in the Jewish sacred canon. What impact did the Persian Zoroastrian Empire, as both a real historical force and an imaginary interlocutor, have on rabbinic identity and authority as expressed in the Talmud? Drawing from the field of comparative religion, Jason Sion Mokhtarian addresses this question by bringing into mutual fruition Talmudic studies and ancient Iranology, two historically distinct disciplines. Whereas most research on the Talmud assumes that the rabbis were an insular group isolated from the cultural horizon outside their academies, this book contextualizes the rabbis and the Talmud within a broader sociocultural orbit by drawing from a wide range of sources from Sasanian Iran, including Middle Persian Zoroastrian literature, archaeological data such as seals and inscriptions, and the Aramaic magical bowl spells. Mokhtarian also includes a detailed examination of the Talmud’s dozens of texts that portray three Persian “others”: the Persians, the Sasanian kings, and the Zoroastrian priests. This book skillfully engages and demonstrates the rich penetration of Persian imperial society and culture on the Jews of late antique Iran.

Jason Sion Mokhtarian’s book, Rabbis, Sorcerers, Kings, and Priests: The Culture of the Talmud in Ancient Iran, was selected by the Jewish Book Council as a finalist for the Nahum Sarna Memorial …

Jason Sion Mokhtarian is Associate Professor and Herbert and Stephanie Neuman Chair in Hebrew and Jewish Literature at Cornell University.

"Recommended for scholars and students of both Jewish and Iranian literature."—Theologische Literaturzeitung

“Building on the recent emergence of a vigorous new direction in Babylonian Talmudic research, and stressing the need for a comprehensive contextualization of the Bavli within its broader Iranian environment, Mokhtarian has provided us with a keenly nuanced and well-balanced example of just such an undertaking. His detailed analysis of the roles and images of Iranian kings, Zoroastrian priests, and sorcerers as reflected in the Babylonian Talmudic corpus represents not only a literary tour de force but provides historians of Jews and Judaism with critical new insights into the nature of Babylonian Jewry's legal status, social structure, and cultural frameworks.”—Isaiah M. Gafni, Sol Rosenbloom Professor of Jewish History at the Hebrew University

“This is the book for anyone interested in the impact of Sasanian-Persian culture on the Babylonian Talmud. Jason Mokhtarian’s consummate knowledge of Iranian languages, religion, and society and his lucid explication of Talmudic passages provide the most comprehensive introduction to this crucial, yet under-explored, subject.”—Jeffrey Rubenstein, Skirball Professor of Talmud and Rabbinics at New York University

“The importance of this book for understanding the Sasanian world cannot be underestimated. Jason Mokhtarian has noted every instance in which the Persians are mentioned in the Talmud and has clarified the meaning of the reference to each. This work will help us understand the social and religious history of the Iranshahr (Realm of the Iranians) and their interaction with the Jewish population of late antiquity.”—Touraj Daryaee, Maseeh Chair in Persian Studies and Culture and Director of the Jordan Center for Persian Studies and Culture at the University of California, Irvine

List of Abbreviations
Note on Translations, Transcriptions, and Manuscripts
Acknowledgments

Introduction
1. The Sources and Methods of Talmudic and Iranian Studies
2. Comparing Sasanian Religions
3. Rabbinic Portrayals of Persians as Others
4. Rabbis and Sasanian Kings in Dialogue
5. Rabbis and Zoroastrian Priests in Judicial Settings
6. Rabbis, Sorcerers, and Priests