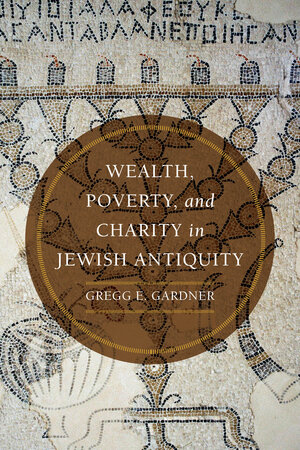 Charity is a central concept of the Jewish tradition. In this formative study, Gregg E. Gardner takes on this concept to examine the beginnings of Jewish thought on care for the poor. Focusing on writings of the earliest rabbis from the third century CE, Gardner shows how the ancient rabbis saw the problem of poverty primarily as questions related to wealth—how it is gained and lost, how it distinguishes rich from poor, and how to convince people to part with their wealth. Contributing to our understanding of the history of religions, Wealth, Poverty, and Charity in Jewish Antiquity demonstrates that a focus on wealth can provide us with a fuller understanding of charity in Jewish thought and the larger world from which Judaism and Christianity emerged.

Gregg E. Gardner is Associate Professor and the Diamond Chair of Jewish Law and Ethics at the University of British Columbia. He is author of The Origins of Organized Charity in Rabbinic Judaism.

"Butting against the prevalent view that wealth in and of itself is morally tainted, Gregg Gardner’s readings of the early rabbis and tanniatic ethics are provocative, insightful, and justified."—Elizabeth Shanks Alexander, Professor of Religious Studies, University of Virginia