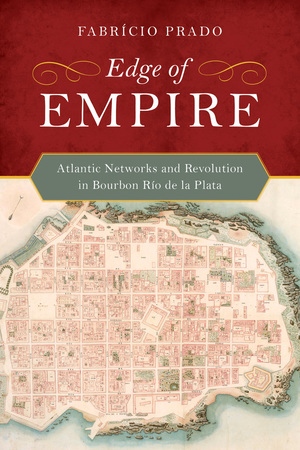 In the first decades of the 1800s, after almost three centuries of Iberian rule, former Spanish territories fragmented into more than a dozen new polities. Edge of Empire analyzes the emergence of Montevideo as a hot spot of Atlantic trade and regional center of power, often opposing Buenos Aires. By focusing on commercial and social networks in the Rio de la Plata region, the book examines how Montevideo merchant elites used transimperial connections to expand their influence and how their trade offered crucial support to Montevideo’s autonomist projects.

These transimperial networks offered different political, social, and economic options to local societies and shaped the politics that emerged in the region, including the formation of Uruguay. Connecting South America to the broader Atlantic World, this book provides an excellent case study for examining the significance of cross-border interactions in shaping independence processes and political identities.

Fabrício Prado is an Assistant Professor of History at the College of William and Mary.

"Edge of Empire is a well-researched and organized narrative that ties local and regional histories back to the transimperial dynamics, especially in the context of Spanish and Portuguese empires."—H-LatAm

"Prado challenges false boundaries scholars have constructed between the Spanish and Portuguese empires. He reveals how commercial, family, and political networks linked the two worlds in the South Atlantic."—Hal Langfur, author of The Forbidden Lands: Colonial Identity, Frontier Violence, and the Persistence of Brazil’s Eastern Indians, 1750–1830

"In Edge of Empire, Prado switches smoothly between local, regional, and imperial frames of analysis and offers a compelling alternative to traditional nation-centered narratives about the end of Iberian colonialism in South America. This book does not just employ an Atlantic paradigm, it improves on it." —Bianca Premo, Associate Professor of History, Florida International University

Introduction
1. A Portuguese Town in Río de la Plata
2. Departing without Leaving: Luso-Brazilians under the Viceroyalty
3. Transimperial Cooperation: Commerce and War in the South Atlantic
4. The Making of Montevideo: Contraband, Reforms, and Authority
5. Changing Toponymy and the Emergence of the Banda Oriental
6. Traversing Empires: The Atlantic Life of Don Manuel Cipriano de Melo
7. Postponing the Revolution: Transimperial Commerce and Monarchism in the Banda Oriental