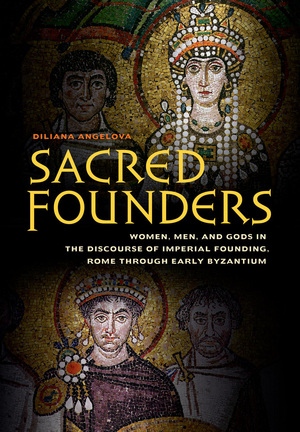 Sacred Founders Women, Men, and Gods in the Discourse of Imperial Founding, Rome through Early Byzantium

Diliana Angelova argues that from the time of Augustus through early Byzantium, a discourse of “sacred founders”—articulated in artwork, literature, imperial honors, and the built environment—helped legitimize the authority of the emperor and his family. The discourse coalesced around the central idea, bound to a myth of origins, that imperial men and women were sacred founders of the land, mirror images of the empire’s divine founders. When Constantine and his formidable mother Helena established a new capital for the Roman Empire, they initiated the Christian transformation of this discourse by brilliantly reformulating the founding myth. Over time, this transformation empowered imperial women, strengthened the cult of the Virgin Mary, fueled contests between church and state, and provoked an arresting synthesis of imperial and Christian art. Sacred Founders presents a bold interpretive framework that unearths deep continuities between the ancient and medieval worlds, recovers a forgotten transformation in female imperial power, and offers a striking reinterpretation of early Christian art.

Diliana N. Angelova is Assistant Professor of the History of Art at the University of California, Berkeley.

"Offers a much more complex picture of how power was conceived and legitimized in antiquity... valuable."—Journal of Roman Studies

“Diliana Angelova offers fresh and highly original approaches to a set of topics of great interest: Constantinople, imperial representation, late Roman empresses, and the cult of the Virgin Mary. Truly a great, groundbreaking book!”—Susanna Elm, Professor of History at University of California, Berkeley and author of Sons of Hellenism, Fathers of the Church: Emperor Julian, Gregory of Nazianzus, and the Vision of Rome

"Angelova produces a skillfully contextualized study that embraces both Roman and early Byzantine norms, mutually illuminating both eras through her balanced analysis. This book will be of great interest to both art historians and historians, and its historical range encompassing Roman and Byzantine imperial culture makes it necessary reading for scholars and students of both eras."—Anne McClanan, Professor of Medieval Art and Digital Humanities at Portland Sate University and author of Representations of Early Byzantine Empresses: Image and Empire