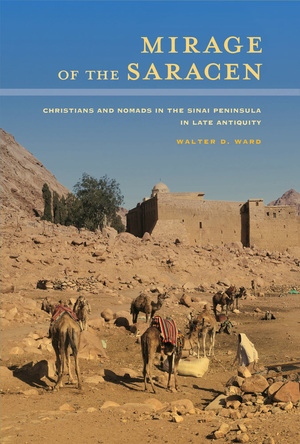 Mirage of the Saracen analyzes the growth of monasticism and Christian settlements in the Sinai Peninsula through the early seventh century C.E. Walter D. Ward examines the ways in which Christian monks justified occupying the Sinai through creating associations between Biblical narratives and Sinai sites while assigning uncivilized, negative, and oppositional traits to the indigenous nomadic population, whom the Christians pejoratively called “Saracens.” By writing edifying tales of hostile nomads and the ensuing martyrdom of the monks, Christians not only reinforced their claims to the spiritual benefits of asceticism but also provoked the Roman authorities to enhance defense of pilgrimage routes to the Sinai. When Muslim armies later began conquering the Middle East, Christians also labeled these new conquerors as Saracens, connecting Muslims to these pre-Islamic representations. This timely and relevant work builds a historical account of interreligious encounters in the ancient world, showing the Sinai as a crucible for forging long-lasting images of both Christians and Muslims, some of which endure today.

Walter D. Ward is Assistant Professor of History at the University of Alabama at Birmingham.

"A well-researched, stimulating work. This book represents an extremely important contribution to the field of late antique and early medieval cultural history and to the history of relations between Christianity and Islam. Truly, an impressive read."—John Tolan, Professor of History, Université de Nantes

"In this intelligent and original study, Walter Ward offers a vivid portrait of the religious culture of the Sinai in late antiquity. He weaves together the strands of continuity connecting Christian views of ‘the Saracen’ in the pre-Islamic and Islamic eras to illuminate the way that later rhetoric of the Muslim ‘other’ percolated into the Roman imperial mainstream. Adeptly grounded in archaeological, anthropological, and literary material, it is elegantly situated within current debates in late antique studies and contains an urgent message for the contemporary era. Mirage of the Saracen deserves to be on the bookshelf of anyone with an interest in the place of religion in the ancient and modern worlds."—Greg Fisher, Professor of Greek and Roman Studies, Carleton University

Preface and Acknowledgments
Note on Translation and Transliteration
Acronyms

One: The Beginnings of the Humanitarian Era the Eastern Mediterranean

Two: The Humanitarian Imagination and the Year of the Locust: International Relief in the Wartime Eastern Mediterranean, 1914-1918

Three: The Form and Content of Suffering: Humanitarian Knowledge, Mass Publics and the Report, 1885-1927

Five: The League of Nations Rescue of Trafficked Women and Children and the Paradox of Modern Humanitarianism, 1920-1936

Six: Between Refugee and Citizen: The Practical Failures of Modern Humanitarianism in the Interwar Eastern Mediterranean, 1923-1939