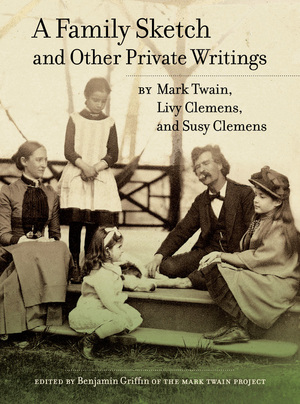 This book publishes, for the first time in full, the two most revealing of Mark Twain’s private writings. Here he turns his mind to the daily life he shared with his wife Livy, their three daughters, a great many servants, and an imposing array of pets. These first-hand accounts display this gifted and loving family in the period of its flourishing.

Mark Twain began to write “A Family Sketch” in response to the early death of his eldest daughter, Susy, but the manuscript grew under his hands to become an exuberant account of the entire household. His record of the childrens’ sayings—“Small Foolishnesses”—is next, followed by the related manuscript “At the Farm.” Also included are selections from Livy’s 1885 diary and an authoritative edition of Susy’s biography of her father, written when she was a teenager. Newly edited from the original manuscripts, this anthology is a unique record of a fascinating family.

Benjamin Griffin is an editor at the Mark Twain Project, which is housed within the Mark Twain Papers, the world’s largest archive of primary materials by this major American writer.

"A rare treat: a glimpse into the home life of one of America’s greatest authors...in his own words."—Glenn Dallas San Francisco Book Review

"The book will delight those with only a popular acquaintance with Twain as well as Twain specialists, literary researchers, and historians."—Journal of American Culture

“It doesn’t matter how long Mark Twain’s papers are lost, misplaced or forgotten. What does matter is that someone somewhere sees fit to bring them back. A Family Sketch is just what a sensible doctor might order for a nation like ours that desperately needs Twain more than ever before. The celebrated author who celebrated a lowly California frog shows that he’s wittier and wiser than any TV personality or psychiatrist. Wherever you go this summer or any season of the year take A Family Sketch with you. You’ll enjoy meeting Twain’s wife Livy and daughter Susy who demonstrate that Mr. Clemens wasn’t the only writer in the family.”—Jonah Raskin, author of A Terrible Beauty: The Wilderness of American Literature

A Family Sketch
by Mark Twain

A True Story, Repeated Word for Word as I Heard It
by Mark Twain

At the Farm
by Mark Twain

About the Texts
About the Illustrations
Biographical Directory
Works Cited
Acknowledgments