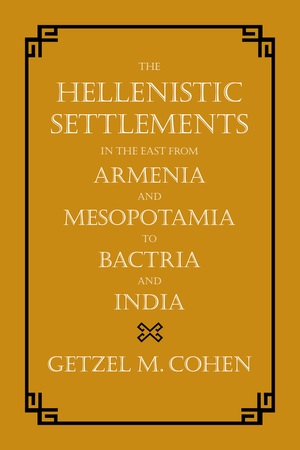 Polybius (8.23[25]) provides our earliest extant evidence for Arsamosata in western Armenia (Sophene). According to him Antiochos III encamped before Armosata (sic), which was located near the "Fair Plain," between the Euphrates and the Tigris. Polybius also says that Xerxes was the king of the city.1 This Xerxes is probably the son of Arsames, who may have been the founder of Arsamosata.2 Pliny (NH 6.26) said it was one of the important cities of Greater Armenia, and Tacitus (Ann. 15.10) described it as a fortress. Ptolemy (5.13.19) said it was located in the region between the Euphrates and the Tigris. T.A. Sinclair has located Arsamosata at the site of Haraba (now partially covered by the lake created by the Keban Dam).3

According to Strabo (11.14.6) Artaxata was founded by Hannibal for King Artaxias. Strabo adds that the city was also called Artaxiasata and was located on the Araxes River. He describes it as "a beautiful settlement and the royal residence (basileion) of the country. It is situated on a peninsula-like elbow of land and its walls have the river as protection all around them, except at the isthmus, which is enclosed by a trench and a palisade" (trans. Jones). Plutarch (Lucullus 31) gives essentially the same information, namely, that Hannibal suggested to Artaxas (sic) that he build a city, and that the king agreed and thereupon asked Hannibal to oversee the building of the city. Plutarch also mentions that it was the royal residence (basileion) of Tigranes.1

1. With regard to the relationship of Hannibal and Artaxias and the credit due each, one might consider ALEXANDREIA near Egypt: Alexander the Great is credited with founding the city, but it is clear that in the initial stages it was Kleomenes and others who actually built it. The Macedonian king was too busy rushing off elsewhere to oversee the day-to-day building of the new settlement.

Ptolemy twice mentions an Artemita in Armenia (5.13.21, 8.19.13). These are the only extant ancient attestations for Artemita. M.-L. Chaumont has suggested it was located on the southeastern shore of Lake Van at the site of the town of Edremit.1 The toponym Artemita is also found in Greece; this suggests that Artemita in Armenia might have been a Hellenistic foundation.2

2. The toponym Artemita was the name of an island (part of the Echinades archipelago) off the southwest coast of Acarnania. Due to silting, it (and other small islands) became attached to the mainland; see Strabo 1.3.18; Pliny NH 4.5; Stephanos, s.v. "Artemita"; and Hirschfeld, RE s.v. "Artemita 4"; Strauch, BNP s.v. "Echinades"; Radt, Kommentar 5:166.

EPIPHANEIA ON THE TIGRIS

Stephanos (s.v. "Epiphaniea 4") is our sole extant source for an Epiphaneia on the Tigris. He adds that it had been called "Arkesikerta" and that it had been founded by Arkesios. A number of sources mention that Antiochos IV Epiphanes conducted a campaign against the Armenian king Artaxias probably in 165 B.C.1 Furthermore, the loss of the eastern Seleucid territories as a result of the defeat of Antiochos VII Sidetes in 129 B.C. at the hands of the Parthians makes it clear that-if Epiphaneia was a Seleucid settlement-it would have been founded before that date. The confluence of these facts suggests, therefore, that the founder was Antiochos IV.

M.-L. Chaumont suggested one of two possible locations for Epiphaneia: Egil or Diyarbakir (modern AMIDA), both in southeastern Turkey.2

2. For the location of Epiphaneiasee the map in Chaumont, Syria 70 (1993) 433. Note that in his enumeration of settlements founded by Seleukos I Nikator, Ps.-Dionysius of Tel Mahre mentioned AMIDA on the Tigris River. Assuming that this information is correct, one could further suggest that the settlement was subsequently renamed by Antiochos IV; cf. EDESSA/ANTIOCH on the Kallirhoe. But this is highly speculative, and I would not press it.

The only extant source for Nicea Nialia is the Tabula Peutingeriana (XI.1).1 Undoubtedly, as J.-G. Droysen suggested, the reference is to a Nikaia, and "Nialia" could be emended to "Paralia." M.-L. Chaumont speculated that the reference could be to a Nikaia or a Nikopolis. We do not know the exact location. K. Miller suggested it was located southeast of Lake Urmia, in the vicinity of Sindschid or Sainkala.2 We should need additional information to affirm that the toponym recorded in the Tabula Peutingeriana reflects the (earlier) presence of a Hellenistic settlement .

In his enumeration of settlements founded by Seleukos I, Appian (Syr. 57) included a Nikopolis in Armenia (ἐν ᾽Αρμενίᾳ τῇ ἀγχοτάτω μάλιστα Καππαδοκίας). In fact, Appian elsewhere (Mith. 105, 115) ascribed the foundation to Pompey. Other ancient sources-for example, Strabo (12.328), Cassius Dio (36.50.3), and Orosius (6.4.7)-also attributed the founding to Pompey.1 We may, therefore, assume that at Syrica 57 Appian erred.2

1. Jones (CERP2 244, 452) dismissed the possibility that Alexander founded a NIKOPOLIS in northern Syria to commemorate his victory over Darius at Issos (see evidence and discussion in that entry). He admitted that Appian's description of Nicopolis as ἐν ᾽Αρμενίᾳ τῇ ἀγχοτάτω μάλιστα Καππαδοκίας (Syr. 57) was "odd," but suggested that it was "intelligible if it be remembered that Commagene was at that date part of Armenia." Jones was therefore willing to accept Appian's statement as evidence that Seleukos founded Nikopolis east of the Amanos Mountains in honor of one of his own victories. Olshausen (KP s.v. "Nikopolis 6") raised the possibility that the place had been founded by Seleukos ("originally under another name?") and then rebuilt by Pompey.

2. On the occasional errors in Appian's list see Cohen, Settlements in Syria 3.

The Tabula Peutingeriana (X.5) records a "Filadelfia" on the road between Artaxata and Ekbatana. This is the only extant source for the settlement. We do not definitely know who was the founder. Three possibilities have been proposed: the Seleucid Demetrios II Theos Philadelphos Nikator, the Parthian Arsakes II, or Artabanos I.1

The location is not definitely known.2

Note that Chaumont objected that the Arsacids did not normally give Greek names to the cities in their kingdom (Syria 70 [1993] 440).

2. Location. Miller believed the settlement was located north of Lake Urmia in northwestern Iran, between the cities of Khoi and Marand (Itineraria 781 and 783-84 [map]; see also the map in Matheson, Persia2 77). Manandian also placed it on the north shore of Lake Urmia, between Khoi and Tasvich (Armenia 110, 113, and map on p. 111); Kiessling (RE s.v. "Filadelfia") remarked simply that it was in Media Atropatene. In general see Chaumont, Syria 70 (1993) 440.

In his account of Tigranes II, Strabo remarks (11.14.15) that the king filled Tigranokerta with people gathered from twelve "Greek cities" that he ravaged (ἐρημωθεισῶν). Elsewhere (12.2.9) Strabo says that after Tigranes overran Cappadocia, he forced the inhabitants-including the inhabitants of Mazaka-to migrate to Mesopotamia; furthermore, he adds that the Armenian king populated Tigranokerta with these people. Plutarch (Luc. 21.4, 26.1, 29.2) also refers to Tigranes' removal and resettlement of "Greeks" from Cilicia and Cappadocia to Tigranokerta and mentions Soloi in Cilicia among the cities that Tigranes had devastated (Pomp. 28). Finally, Appian (Mith. 67) says that Tigranes named the city after himself and that the total number of people transplanted from Cappadocia to Armenia was approximately 300,000; he also informs us that Tigranes founded Tigranokerta at the site where he had first assumed the diadem of Armenia.1 This suggests that Tigranokerta was founded at the site of an older, Assyrian town.2

This is the third volume of Getzel Cohen’s important work on the Hellenistic settlements in the ancient world. Through the conquests of Alexander the Great, his successors and others, Greek and Macedonian culture spread deep into Asia, with colonists settling as far away as Bactria and India. In this book, Cohen provides historical narratives, detailed references, citations, and commentaries on all the Graeco-Macedonian settlements founded (or refounded) in the East. Organized geographically, Cohen pulls together discoveries and debates from dozens of widely scattered archaeological and epigraphic projects, making a distinct contribution to ongoing questions and opening new avenues of inquiry.

Getzel M. Cohen is Professor of Classics and Director of the Tytus Visiting Scholars Program at the University of Cincinnati. He is also Director of the Institute for Mediterranean Studies. Among his other works, he is the author of The Hellenistic Settlements in Europe, the Islands and Asia Minor and The Hellenistic Settlements in Syria, the Red Sea Basin and North Africa (both UC Press).

Praise for the author's previous volumes on the Hellenistic settlements:

"A major piece of scholarship. It will be constantly consulted and will take a place among the leading reference works available to the growing number of scholars and students now working on the Hellenistic age."—American Journal of Archaeology

"An important work for professional classicists and historians interested in Hellenistic cities, city founding, and political history. Indeed, [it] will become the standard reference work on Hellenistic city foundations."—History

"A monumental compendium. . . . [It] will become a standard reference work for the next generation of Hellenistic historians; it can also serve as a model for the distillation and presentation of a massive, scattered, and difficult body of evidence and scholarship on one of the most difficult, but surely most important, aspects of Hellenistic civilization."—Bryn Mawr Clasical Review

Appendices
I. Founders
II. Settlements in Mesopotamia and Iran Attributed to Alexander
III. Greek and Macedonian Toponyms and Names/Words That (Re)appear in Mesopotamia and Regions Farther East IV. Refoundations and New Foundations
V. Foundations at or near Major Religious Centers
VI. Civic Institutions and Offices
VII. Ethnics and Toponyms
VIII. The Toponymy of the Hellenistic Settlements
IX. Polis Hellenis
X. The Ethnic “Babylonian”