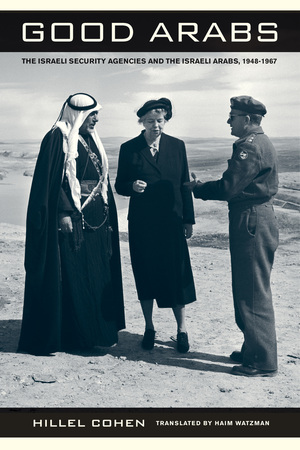 Good Arabs The Israeli Security Agencies and the Israeli Arabs, 1948–1967

Based on his reading of top-secret files of the Israeli police and the prime minister's office, Hillel Cohen exposes the full extent of the crucial, and, until now, willfully hidden history of Palestinian collaboration with Israelis—and of the Arab resistance to it. Cohen's previous book, the highly acclaimed Army of Shadows,told how this hidden history played out from 1917 to 1948, and now, in Good Arabs he focuses on the system of collaborators established by Israel in each and every Arab community after the 1948 war. Covering a broad spectrum of attitudes and behaviors, Cohen brings together the stories of activists, mukhtars, collaborators, teachers, and sheikhs, telling how Israeli security agencies penetrated Arab communities, how they obtained collaboration, how national activists fought them, and how deeply this activity influenced daily life. When this book was first published in Hebrew, it became a bestseller and has evoked bitter memories and intense discussions among Palestinians in Israel and prompted the reclassification of many of the hundreds of documents Cohen viewed to uncover a story that continues to unfold to this day.

Hillel Cohen is Research Fellow at the Harry S. Truman Institute for the Advancement of Peace at the Hebrew University of Jerusalem. He is the author of Army of Shadows: Palestinian Collaborators with Zionism 1917-1948 (UC Press), The Present Absentees: Palestinian Refugees in Israel since 1948, and The Marketplace is Empty: The Rise and Fall of Arab Jerusalem 1967-2007.

“Cohen paints a remarkably balanced and comprehensive picture of the complex relationship between Israel’s Arab citizens and the authorities. It is a fascinating tale, but his account of espionage, patronage, bribery, treachery, deception, smuggling, infiltration, intimidation, threats, double dealing – and often murder – does not make for pleasant reading.”—Jerusalem Post

“The true significance of Good Arabs has little to do with the colourful historical tales of Israeli security men and their Palestinian consorts. The book’s power derives from its resonance for the present day, and the way that it illuminates the attitude that Israel has taken – and still takes – toward the Palestinians, whether they are citizens of Israel or residents of territories under Israeli control.”—The National

“A fascinating study, detailed but never boring, with revelations about the past that help explain later developments between the State and Israeli Arabs.”—Jewish Book World

“This is a very important study, scholarly yet accessible to all levels of readers.”—Assoc Of Jewish Libraries Nwsltr

“Readers will be engaged and informed by his skillful narrative and analysis of a much-contended topic.”—Shalom Goldman The Historian

“Good Arabs achieves an unusual poignancy. . . . By heeding its lessons today, the Israeli leadership may be able to inch closer to a realistic and ethical framework for embracing minorities in the Jewish state.”—The Jerusalem Report

“This book sensitively and convincingly illuminates the complexity of life as an ‘Israeli Arab’ . . . [it] is a crucial contribution to the growing literature on this population’s experience.”—Ilana Feldman American Historical Review

“This book was, understandably, a best-seller in Israel.”—Magill's Literary Annual / Salem Press

“This murky facet of Israel’s history is deftly described at length.”—Canadian Jewish News

“Cohen accomplishes his goal of portraying the tensions between the Israeli state and its Arab citizens on the local and personal levels. More than that, he takes the reader into an intricate world of espionage, bribery, and punishment. . . . One of the outstanding aspects of Cohen’s book is his ability to avoid blatant value judgments about his subjects.”—Middle East International

“Makes extensive use of the thousands of recently declassified Israeli government and police files to argue that Israel has attempted, from its earliest days, to control and co-opt the lives of its Palestinian citizens.”—Publishers Weekly

“A comprehensive and original history of collaboration within the Palestinian community inside Israel.”—Review Of Middle East Stds

“Cohen brings together the stories of activists, mukhtars, collaborators, teachers, and sheikhs, telling how Israeli security agencies penetrated Arab communities, how they obtained collaboration, how national activists fought them, and how deeply this activity influenced daily life.”—Shofar

"A fascinating story. . . . With the publication of this book, we can abandon several accepted clichés."—Ha'aretz

"While many Israelis—Jews and Palestinians alike—already had a sense that these shadowplays were part of the state's history, Aravim Tovim (Good Arabs) supplies the evidence. Case after case is summoned to illustrate how collaboration permeated all aspects of Palestinian society."—The Nation

"The impressive achievement of this timely book is its equal and honest treatment of the explosive issues involved in spite of an often agonizing conflict of interests—and its articulation of the author's findings with empathy, boldness and fairness."—Jerusalem Post

1. Beginning a Beautiful Friendship: The Rise of the Collaborator Class
2. Communists vs. the Military Government,
Collaborators vs. the Communists
3. Boundary Breakers: Infiltrators, Smugglers, Spies
4. The Land
5. The Battle of the Narrative: Symbols, Pronouncements, Teachers
6. Minorities within a Minority: Dilemmas of Identity
7. Circles of Control, Circles of Resistance 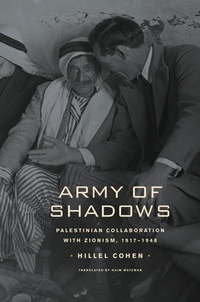