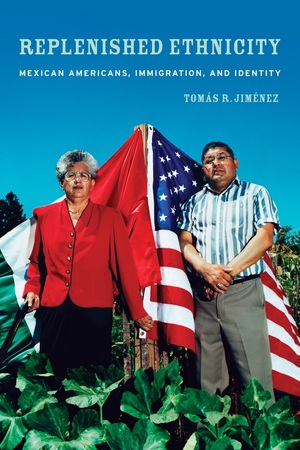 Unlike the wave of immigration that came through Ellis Island and then subsided, immigration to the United States from Mexico has been virtually uninterrupted for one hundred years. In this vividly detailed book, Tomás R. Jiménez takes us into the lives of later-generation descendents of Mexican immigrants, asking for the first time how this constant influx of immigrants from their ethnic homeland has shaped their assimilation. His nuanced investigation of this complex and little-studied phenomenon finds that continuous immigration has resulted in a vibrant ethnicity that later-generation Mexican Americans describe as both costly and beneficial. Replenished Ethnicity sheds new light on America's largest ethnic group, making it must reading for anyone interested in how immigration is changing the United States.

Tomás R. Jiménez is Assistant Professor of Sociology at Stanford University and an Irvine Fellow at the New America Foundation.

“This book strikes a balance between those who think of Latinos only as immigrants and those who pretend that immigration is not part of the Latino reality.”—American Journal Of Sociology / AJS

"Without a doubt, Tomás Jiménez has written the single most important contemporary academic study on Mexican American assimilation. Clear-headed, crisply written, and free of ideological bias, Replenished Ethnicity is an extraordinary breakthrough in our understanding of the largest immigrant group in the history of the United States. Bravo!"—Gregory Rodriguez, author of Mongrels, Bastards, Orphans, and Vagabonds: Mexican Immigration and the Future of Race in America

"Tomás Jiménez's Replenished Ethnicity brilliantly navigates between the two opposing perils in the study of Mexican Americans—pessimistically overracializing them or optimistically overassimilating them. This much-needed and gracefully written book illuminates the on-the-ground situations of the later generations of this key American group, insightfully identifying and analyzing the unique factor operating in its case: more or less continuous immigration for more than a century. Jiménez's work provides a landmark for all future studies of Latin American incorporation into U.S. society."—Richard Alba, author of Remaking the American Mainstream


"Tomás Jiménez's study adds a much-needed but long absent element to our understanding of how immigration contributes to the construction and reproduction of Mexican American ethnicity even as it continuously evolves. His work provides useful and needed detail that are absent even from the most reliable surveys."—Rodolfo de la Garza, Columbia University

“In a masterful piece of social science, Tomás Jiménez debunks allegations about slow social and cultural assimilation of Mexican Americans through a richly textured ethnographic account of Mexican Americans' lived experiences in two communities with distinct immigration experiences. Population replenishment via immigration, he claims, maintains distinctiveness of established Mexican origin generations via infusion of cultural elixir-in varying doses over time and place. Ironically, it is the vast heterogeneity of Mexican Americans-generational depth, socioeconomic, national origin and legal-that both contributes to the population's ethnic uniqueness and yet defies singular theoretical frameworks. Jiménez's page-turner uses the Mexican American ethnic prism to re-interpret the U.S. ethnic tapestry and revise the canonical view of assimilation. Replenished Ethnicity sets a high bar for second generation scholarship about Mexican Americans.“—Marta Tienda, The Office of Population Research at Princeton University