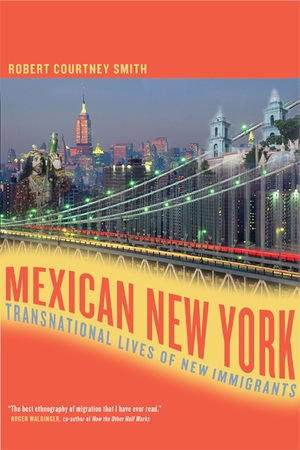 Drawing on more than fifteen years of research, Mexican New York offers an intimate view of globalization as it is lived by Mexican immigrants and their children in New York and in Mexico. Robert Courtney Smith's groundbreaking study sheds new light on transnationalism, vividly illustrating how immigrants move back and forth between New York and their home village in Puebla with considerable ease, borrowing from and contributing to both communities as they forge new gender roles; new strategies of social mobility, race, and even adolescence; and new brands of politics and egalitarianism.

Smith's deeply informed narrative describes how first-generation men who have lived in New York for decades become important political leaders in their home villages in Mexico. Smith explains how relations between immigrant men and women and their U.S.-born children are renegotiated in the context of migration to New York and temporary return visits to Mexico. He illustrates how U.S.-born youth keep their attachments to Mexico, and how changes in migration and assimilation have combined to transnationalize both U.S.-born adolescents and Mexican gangs between New York and Puebla. Mexican New York profoundly deepens our knowledge of immigration as a social process, convincingly showing how some immigrants live and function in two worlds at the same time and how transnationalization and assimilation are not opposing, but related, phenomena.

Robert Courtney Smith is Associate Professor of Sociology, Immigration Studies and Public Affairs, School of Public Affairs, Baruch College, and Graduate Center, City University of New York. He is the coeditor of Migration, Transnationalization, and Race in a Changing New York (2001). He is cofounder of the Mexican Educational Foundation of New York, a 501c(3) organization.

“In this ambitious project, [Smith] diligently demonstrates how ‘transnational life is embodied in identities and social structures’.”—American Journal Of Sociology / AJS

"An ethnographic classic and the best ethnography of migration that I have ever read."—Roger Waldinger, coauthor of How the Other Half Works

"A compelling, multi-dimensional portrait of Mexicans in New York. Smith authoritatively examines, in considerable detail and with convincing ethnographic evidence, how immigration patterns have drastically changed over the last 15 years, creating a group of 'transnational migrants.'"—Francisco Lomeli, author of U.S. Latino Literatures and Cultures

"Many observers of American migration have noticed the increasing formation of transnational communities instead of one-way transfers from old country to new. In his warm, perceptive, richly documented study of a Mexican town, its New York counterpart, and the connections between them, however, Robert Smith has lived, chronicled, and reinterpreted the human experience of transnationalism. He shows us how individual and collective transformations interact, producing surprising new varieties of social life."—Charles Tilly, author of Durable Inequality

"Studying local processes over an extended period of time has allowed Smith to make a major theoretical and methodological contribution to our understanding of the migration experience. Smith brilliantly succeeds in detecting as yet unrecognized dynamics in the increasingly complex and multi-sited character of migration."—Saskia Sassen, author of Guests and Aliens


"In this essential book, Robert Courtney Smith provides insight on New York City in a new and important way. After years of research and observation, Smith documents a world through the eyes of the city's growing Mexican population. Smith's crucial points about immigration and transnational identity make compelling reading because of the sense of joy in his writing at being so close to a community that is redefining the American immigrant experience."—Deborah Amos, Correspondent, National Public Radio

"The big contributions in ethnography come from doing something ambitious and novel in data gathering. Smith's research is not only unprecedented in its fieldwork, his analyses are consistently subtle, surprising and omni-relevant to major sociological issues. An instant classic, Mexican New York deeply carves a new benchmark for immigration studies."—Jack Katz, professor of sociology, University of California Los Angeles
Read More >