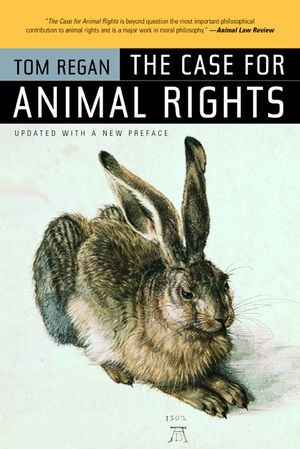 The Case for Animal Rights Updated with a New Preface

More than twenty years after its original publication, The Case for Animal Rights is an acknowledged classic of moral philosophy, and its author is recognized as the intellectual leader of the animal rights movement. In a new and fully considered preface, Regan responds to his critics and defends the book's revolutionary position.

Tom Regan is Professor Emeritus of Philosophy at North Carolina State University and is the author (with Carl Cohen) of The Animal Rights Debate (2001) and Empty Cages: Facing the Challenge of Animal Rights (2004).

"Aristotle, Aquinas, Descartes, Kant, Bentham, Mill: all thought seriously about the role of animals in our lives. But not until Tom Regan published The Case for Animal Rights did the world possess a theory of the rights of animals. When philosophy students come to this issue hundreds of years from now, they will read the greats in light of the arguments presented here."—Gary L. Comstock, editor of Life Science Ethics

"A bold and nuanced analysis of the inherent value and moral standing of nonhuman animals. It may also be the most consistent and unyielding defense of animal rights."—Tom L. Beauchamp, Georgetown University

"The most powerful and plausible consideration of the issues and defense of animal rights yet to be produced (or likely to be)."—Richard Wasserstrom

"By far the best work on the subject, and will continue to be the definitive work for years to come . . . .[It is] destined to become a 'modern classic' in the field of ethics, alongside Rawls’s A Theory of Justice and Nozick’s Anarchy, State, and Utopia."—Alastair S. Gunn, coauthor of Hold Paramount


Praise for the first edition:

"Unquestionably the best work yet to appear in its field, surpassing even Peter Singer's famous Animal Liberation in originality, thoroughness, and rigor."—Choice

"The Case for Animal Rights is beyond question the most important philosophical contribution to animal rights and is a major work in moral philosophy."—Animal Law Review

"The most powerful and plausible consideration of the issues and defense of animal rights yet to be produced (or likely to be)."—Richard Wasserstrom, author of Philosophy and Social Issues (1980)
Read More >

1. ANIMAL AWARENESS
1.1 Descartes's Denial
1.2 How Not to Challenge Descartes
1.3 The Principle of Parsimony
1.4 La Mettrie's Objection
1.5 The Language Test
1.6 Skepticism
1.7 Evolutionary Theory and Consciousness
1.8 Descartes's Downfall
1.9 The Cumulative Argument for Animal Consciousness
1.10 Which Animals are Conscious?
1.11. Summary and Conclusion

2. THE COMPLEXITY OF ANIMAL AWARENESS
2.1 The Belief-Desire Theory
2.2 Language and Belief
2.3 The Content of Belief
2.4 Three Objections
2.5 The Complexity of Animal Consciousness
2.6 Summary and Conclusion

7. JUSTICE AND EQUALITY
7.1 Utilitarian and Perfectionist Theories of Justice
7.2 Individuals as Equal in Value
7.3 "All Animals Are Equal"
7.4 Inherent Value and Reverence for Life
7.5 Inherent Value and the Subject-of-a-Life Criterion
7.6 Justice: The Principle of Respect for Individuals
7.7 Rule Utilitarianism and Justice
7.8 Defending the Respect Principle
7.9 The Derivation of the Harm Principle
7.10 Summary and Conclusion

8. THE RIGHTS VIEW
8.1 Moral and Legal Rights
8.2 Claims and Valid Claims
8.3 Acquired and Unacquired Duties
8.4 The Respect Principle and the Right To Respectful Treatment
8.5 The Rights of Moral Patients
8.6 A Miscellany of Objections
8.7 Overriding the Right Not to be Harmed
8.8 The Innocence of Moral Patients 8.9 Should the Numbers Count?
8.10 The Miniride and Worse-off Principles
8.11 Why Side Effects Don't Count
8.12 More Objections Answered
8.13 Unfinished Business
8.14 Summary and Conclusion

9. IMPLICATIONS OF THE RIGHTS VIEW
9.1 Why Vegetarianism is Obligatory
9.2 Why Hunting and Trapping Are Wrong
9.3 How to Worry about Endangered Species
9.4 Against the Use of Animals in Science
9.5 Summary and Conclusion