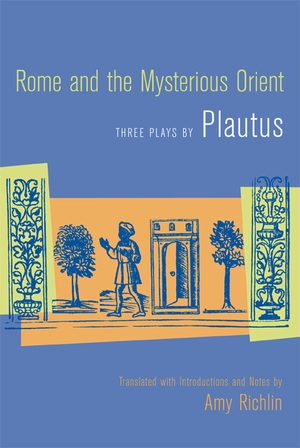 Rome and the Mysterious Orient Three Plays by Plautus

Still funny after two thousand years, the Roman playwright Plautus wrote around 200 B.C.E., a period when Rome was fighting neighbors on all fronts, including North Africa and the Near East. These three plays—originally written for a wartime audience of refugees, POWs, soldiers and veterans, exiles, immigrants, people newly enslaved in the wars, and citizens—tap into the mix of fear, loathing, and curiosity with which cultures, particularly Western and Eastern cultures, often view each other, always a productive source of comedy. These current, accessible, and accurate translations have replaced terms meaningful only to their original audience, such as references to Roman gods, with a hilarious, inspired sampling of American popular culture—from songs to movie stars to slang. Matching the original Latin line for line, this volume captures the full exuberance of Plautus's street language, bursting with puns, learned allusions, ethnic slurs, dirty jokes, and profanities, as it brings three rarely translated works—Weevil (Curculio), Iran Man (Persa), and Towelheads (Poenulus)—to a wide contemporary audience.

Richlin's erudite introduction sets these plays within the context of the long history of East-West conflict and illuminates the role played by comedy and performance in imperialism and colonialism. She has also provided detailed and wide-ranging contextual introductions to the individual plays, as well as extensive notes, which, together with these superb and provocative translations, will bring Plautus alive for a new generation of readers and actors.

Amy Richlin, Professor of Classics at the University of California, Los Angeles, is author of The Garden of Priapus: Sexuality and Aggression in Roman Humor (revised edition, 1992), editor of Pornography and Representation in Greece and Rome (1992), and coeditor, with Nancy Sorkin Rabinowitz, of Feminist Theory and the Classics (1993).

“Fizzy and streetwise, this translation represents a huge advance on the ersatz Elizabethan of many Plautine versions.”—Times Literary Supplement (TLS)

"Amy Richlin is a gifted and original scholar who has taught a whole generation of classicists and their students answers to the question, What made the Romans laugh? Now it turns out she has contemporary cultures' number as well. She translates Roman laughter into American laughter. From its ingeniously banal title onwards, Rome and the Mysterious Orient brings three remarkable and rarely performed comedies to life on the page and—one hopes, often—the stage."—James Tatum, author of Plautus: The Darker Comedies