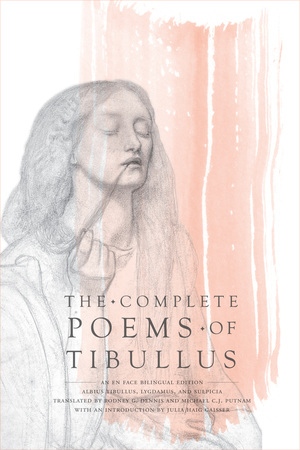 The Complete Poems of Tibullus An En Face Bilingual Edition

Tibullus has left us just sixteen elegies. Their subjects are various: love (of the fickle girls Delia and Nemesis and of the equally fickle boy Marathus), hatred of war, praise of his friend and patron, Messalla Corvinus, the pleasures of rural simplicity, a celebration of Rome. His poems glide easily, some would say dreamily, from theme to theme, moving almost like a slide show through apparently random images and musings. The ancient critic Quintilian considered Tibullus "the most polished and elegant" of the Roman elegists. He is also the most artful. His randomness and dreaminess are carefully created illusions; the elegance and polish so admired by Quintilian are achieved with intention and consummate skill. Tibullus's artistry is more subtle than that of the other elegists-we could almost call it clandestine. Propertius, notoriously difficult, displays his learning and emotional complexity with allusions to Callimachus, jumps in thought, and elaborate mythological exempla. Ovid is smooth and ostentatiously clever-a witty master of language who is self-consciously playful both in and out of season. Tibullus, by contrast, never advertises. He is as learned and witty as either of his fellow elegists, and with emotional depths of his own, but his is the art that conceals, rather than rev

Tibullus is considered one of the finest exponents of Latin lyric in the golden age of Rome, during the Emperor Augustus’s reign, and his poetry retains its enduring beauty and appeal. Together these works provide an important document for anyone who seeks to understand Roman culture and sexuality and the origins of Western poetry.

• The new translation by Rodney Dennis and Michael Putnam conveys to students the elegance and wit of the original poems.

• The Latin verses will be printed side-by-side with the English text.

• An introduction by Julia Haig Gaisser provides the necessary historical and social background to the poet’s life and works.

• Includes the poems of Sulpicia and Lygdamus, transmitted with the text of Tibullus and formerly ascribed to him.

Rodney G. Dennis was Curator of Manuscripts at Houghton Library, Harvard University, from 1965 to 1991. A translator of both Classical and Renaissance Latin, he was a founding editor of Persephone as well as a lecturer in English at Harvard.

Michael C. J. Putnam is MacMillan Professor of Classics and Professor of Comparative Literature emeritus at Brown University. His many other books include Virgil’s Epic Designs and Horace’s Carmen Saeculare , Poetic Interplay, and A Companion to Virgil’s Aeneid and its Tradition.

Julia Haig Gaisser Eugenia Chase Guild Professor Emerita in the Humanities and Professor Emerita of Latin at Bryn Mawr College. Her book The Fortunes of Apuleius and the Golden Ass won the 2009 Charles J. Goodwin Award of Merit, the highest award for a work of Classics, given by the American Philological Association. Her other books include Catullus in Englishand Pierio Valeriano on the Ill-fortune of Learned Men.

“The new translation of Tibullus by Michael Putnam and the late Rodney Dennis is quite simply, the best translation of Latin non-narrative poetry I have ever seen. . . . Time and again, Dennis and Putnam produce remarkably apt renditions of couplets whose artistic structure would seem to elude their being fully Englished. . . . For the last twenty years, I have by and large refrained from teaching Tibullus in translation, owing to the lack of an effective rendition. That is about to change!”—Paul Allen Miller, University of South Carolina Bryn Mawr Classical Review (BMCR)