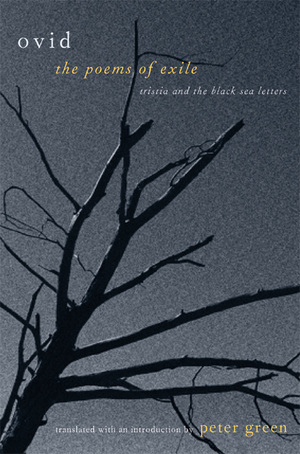 The Poems of Exile Tristia and the Black Sea Letters, With a New Foreword

In the year A.D. 8, Emperor Augustus sentenced the elegant, brilliant, and sophisticated Roman poet Ovid to exile—permanently, as it turned out—at Tomis, modern Constantza, on the Romanian coast of the Black Sea. The real reason for the emperor's action has never come to light, and all of Ovid's subsequent efforts to secure either a reprieve or, at the very least, a transfer to a less dangerous place of exile failed. Two millennia later, the agonized, witty, vivid, nostalgic, and often slyly malicious poems he wrote at Tomis remain as fresh as the day they were written, a testament for exiles everywhere, in all ages.

The two books of the Poems of Exile, the Lamentations (Tristia) and the Black Sea Letters (Epistulae ex Ponto), chronicle Ovid's impressions of Tomis—its appalling winters, bleak terrain, and sporadic raids by barbarous nomads—as well as his aching memories and ongoing appeals to his friends and his patient wife to intercede on his behalf. While pretending to have lost his old literary skills and even to be forgetting his Latin, in the Poems of Exile Ovid in fact displays all his virtuoso poetic talent, now concentrated on one objective: ending the exile. But his rhetorical message falls on obdurately deaf ears, and his appeals slowly lose hope. A superb literary artist to the end, Ovid offers an authentic, unforgettable panorama of the death-in-life he endured at Tomis.

Peter Green is Dougherty Centennial Professor Emeritus of Classics at the University of Texas at Austin and Adjunct Professor of Classics at the University of Iowa.He is the author of many books, including Alexander of Macedon, 356-323 B.C.: A Historical Biography (California, 1991) and Alexander to Actium: The Historical Evolution of the Hellenistic Age (California, 1990).His translations include Juvenal: The Sixteen Satires (third edition, 1998) and Apollonios Rhodios: The Argonautika (California, 1997).

“Green doesn’t just give a translation, but a rich introduction and copious notes, and his book is the obvious place for the Latinless to begin exploring Ovid in Exile. Green’s introduction covers a lot of ground, and in particular pinpoints with wonderfully economical insight the themes of exile which Ovid first embodies for us. . . .”—London Review of Books

"This is no small achievement. For the language-lover the translation provides elegant, flowing English verse, for the classicist it conveys close approximation to the Latin meaning coupled with a sense of the movement and rhythmic variety of Ovid's language"—Geraldine Herbert-Brown, editor of Ovid's Fasti: Historical Readings at its Bimillennium

"This book fills a gap. There is no similar annotated English translation of Ovid's exile poetry. Thoroughly grounded in Ovidian scholarship, Green's introduction and notes are helpful and informative. The translation is accurate, idiomatic, and lively, closely imitating the Latin elegiac couplet and capturing Ovid's changing moods."—Karl Galinsky, author of Ovid's Metamorphoses: An Introduction to the Basic Aspects