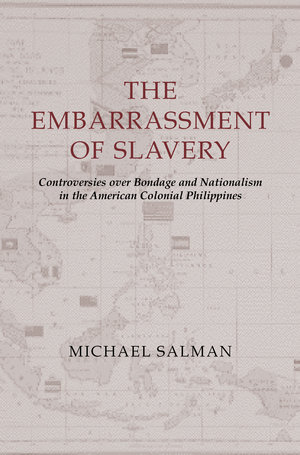 A series of controversies over the existence and meaning of slavery shaped American colonialism and nationalist resistance in the Philippines. While American officials claimed colonialism would free Filipinos from various forms of slavery and American anti-imperialists countered that colonialism itself would constitute new kinds of bondage, the first generation of Filipino nationalists had already appropriated anti-slavery rhetoric in their struggles with Spanish colonialism in the late nineteenth century. From these contentions about slavery as a political metaphor, new disputes erupted when American officials "discovered" the practice of slavery among minority groups, such as the Moro (Muslim) societies of the southern Philippines and animist groups in upland northern Luzon. Michael Salman reconstructs these controversies and charts the successive emergence of slavery as an embarrassment for American colonial officials, Filipino nationalists, and American anti-imperialists.

The Embarrassment of Slavery examines, for the first time, the salience of slavery and abolition in the history of American colonialism and Philippine nationalism. In doing so, it makes major contributions to the global and comparative study of slavery, abolition, colonialism, and nationalism. This book also expands our understanding of slavery and abolition by explaining the link between the globalization of nationalism and the spread of antislavery as a hegemonic ideology in the modern world.

Michael Salman is Associate Professor of History at the University of California, Los Angeles.

"The Embarrassment of Slavery will make a major contribution to the global history of slavery and colonialism as well as to U.S. history in general. . . . Few if any of the hundreds of scholars who have revolutionized our understanding of New World slavery and abolition know that slavery became a central issue in the ensuing debates over colonialism and Philippine independence. Michael Salman fills this vacuum and greatly expands our historical horizon. He also integrates the story of slavery in the Philippines with an enriched interpretation of antislavery ideology."—David Brion Davis, author of The Problem of Slavery in Western Culture and Slavery and Human Progress, and Director of Yale University's Gilder Lehrman Center for the Study of Slavery, Resistance, and Abolition

"Based on a broad and careful consideration of archival sources, Salman presents a wide range of materials that have often been at the periphery of scholarship on colonial and national histories but have never been treated systematically. Using the prism of anti-slavery ideology and the lingering anxieties about slavery and its opposite conditions, Salman is poised to make a crucial intervention in the comparative study of twentieth century colonialism. The Embarrassment of Slavery is an original and compelling work."—Vicente Rafael, author of White Love and Other Events in Filipino History and Contracting Colonialism: Translation and Christian Conversions in Tagalog Society Under Early Spanish Rule