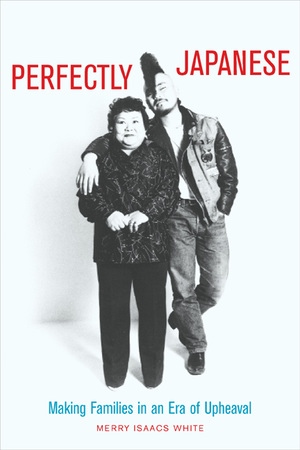 Perfectly Japanese Making Families in an Era of Upheaval

Are Japanese families in crisis? In this dynamic and substantive study, Merry Isaacs White looks back at two key moments of "family making" in the past hundred years—the Meiji era and postwar period—to see how models for the Japanese family have been constructed. The models had little to do with families of their eras and even less to do with families today, she finds. She vividly portrays the everyday reality of a range of families: young married couples who experience fleeting togetherness until the first child is born; a family separated by job shifts; a family with a grandmother as babysitter; a marriage without children.

Merry Isaacs White is Professor of Anthropology at Boston University. She is the author of The Japanese Educational Challenge: A Commitment to Children (1987), The Japanese Overseas: Can They Go Home Again? (1986), and The Material Child: Coming of Age in Japan and America (California, 1993) and coeditor of Comparing Cultures: Readings for Writers on Contemporary America and Japan (1996).

"White debunks the idealized image of the Japanese family held by many Americans as the exemplar of traditional family values—stable, dutiful, homogeneous, harmonious. This is also the 'official image' promoted by state, the media, and other institutions. Instead, White shows that families in Japan are as diverse, complex and contested as ours. She exposes the struggle of individuals and families as they negotiate the gap between the ideal and the realities of the post-industrial world of the twenty-first century."—Arlene Skolnick, author of Embattled Paradise: The American Family in an Age of Uncertainty

"Japanese politicians have pronounced the declining birthrate a national crisis. White gives us an enlightening bolt of reality, showing how Japanese families are really coping with the enormous changes surrounding them. Creative new patterns in dealing with the elderly, shopping, young people living at home, and married couples who continue to have an average of two or more children, are explored in depth."—Ezra Vogel, Henry Ford II Research Professor at Harvard and author of Is Japan Still Number One?

PART ONE: MAKING FAMILY—A NATION BEGINS AT HOME
1. Why Families Are a National Security Issue
2. Family Under Construction: One Hundred Years at Home
3. Families in Postwar Japan: Democracy and Reconstruction