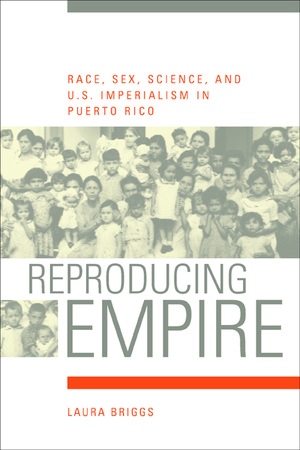 Original and compelling, Laura Briggs's Reproducing Empire shows how, for both Puerto Ricans and North Americans, ideologies of sexuality, reproduction, and gender have shaped relations between the island and the mainland. From science to public policy, the "culture of poverty" to overpopulation, feminism to Puerto Rican nationalism, this book uncovers the persistence of concerns about motherhood, prostitution, and family in shaping the beliefs and practices of virtually every player in the twentieth-century drama of Puerto Rican colonialism. In this way, it sheds light on the legacies haunting contemporary debates over globalization.

Puerto Rico is a perfect lens through which to examine colonialism and globalization because for the past century it has been where the United States has expressed and fine-tuned its attitudes toward its own expansionism. Puerto Rico's history holds no simple lessons for present-day debate over globalization but does unearth some of its history. Reproducing Empire suggests that interventionist discourses of rescue, family, and sexuality fueled U.S. imperial projects and organized American colonialism.

Through the politics, biology, and medicine of eugenics, prostitution, and birth control, the United States has justified its presence in the territory's politics and society. Briggs makes an innovative contribution to Puerto Rican and U.S. history, effectively arguing that gender has been crucial to the relationship between the United States and Puerto Rico, and more broadly, to U.S. expansion elsewhere.

Laura Briggs is Assistant Professor in the Department of Women's Studies at the University of Arizona.

"Laura Briggs has given us a very smart book. She's opened my eyes to Puerto Rican women's centrality to the entire American imperial enterprise. Pay attention to prostitution—debates about it, maneuvers to control it, reliance on it—and we'll gain a more realistic sense of political life. Briggs shows us how true that is. I'm going to recommend this book to everyone."—Cynthia Enloe, author of Maneuvers: The International Politics of Militarizing Women's Lives

"A superb analysis of how U.S. colonialism in Puerto Rico had profound effects on sex, gender, and racial formations in both nations. Briggs sets new standards for the study of race and gender in U.S. women's history."—Peggy Pascoe, University of Oregon

1. Sexuality, Medicine, and Imperialism: The International Traffic in Prostitution Policy
2. Sex and Citizenship: The Politics of Prostitution in Puerto Rico, 1898–1918
3. Debating Reproduction: Birth Control, Eugenics, and Overpopulation in Puerto Rico, 1920–1940
4. Demon Mothers in the Social Laboratory: Development, Overpopulation, and "the Pill," 1940–1960
5. The Politics of Sterilization, 1937–1974
6. "I like to be in America": Postwar Puerto Rican Migration, the Culture of Poverty, and the Moynihan Report

Epilogue. Ghosts, Cyborgs, and Why Puerto Rico Is the Most Important Place in the World
Notes
Bibliography
Index