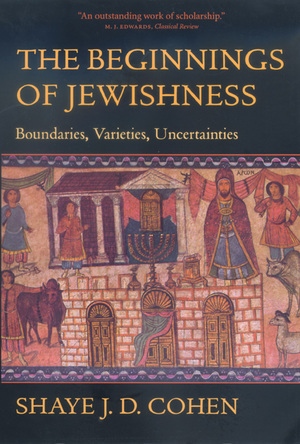 In modern times, various Jewish groups have argued whether Jewishness is a function of ethnicity, of nationality, of religion, or of all three. These fundamental conceptions were already in place in antiquity. The peculiar combination of ethnicity, nationality, and religion that would characterize Jewishness through the centuries first took shape in the second century B.C.E. This brilliantly argued, accessible book unravels one of the most complex issues of late antiquity by showing how these elements were understood and applied in the construction of Jewish identity—by Jews, by gentiles, and by the state.

Beginning with the intriguing case of Herod the Great's Jewishness, Cohen moves on to discuss what made or did not make Jewish identity during the period, the question of conversion, the prohibition of intermarriage, matrilineal descent, and the place of the convert in the Jewish and non-Jewish worlds. His superb study is unique in that it draws on a wide range of sources: Jewish literature written in Greek, classical sources, and rabbinic texts, both ancient and medieval. It also features a detailed discussion of many of the central rabbinic texts dealing with conversion to Judaism.

Shaye J. D. Cohen is Ungerleider Professor of Judaic Studies and Professor of Religious Studies at Brown University. His earlier books include Josephus in Galilee and Rome: His Vita and Development as a Historian (1979) and From the Maccabees to the Mishnah: A Profile of Judaism (1987).

ACKNOWLEDGMENTS
A NOTE ON God AND PARENTHESES
PROLOGUE: JEWS AND OTHERS

PART I: WHO WAS A JEW?
I
Was Herod Jewish?
2
"Those Who Say They Are Jews and Are Not":
How Do You Know a Jew in Antiquity When
You See One?
3
Ioudaios, Iudaeus, Judaean, Jew

PART II: THE BOUNDARY CROSSED:
BECOMING A JEW
4
From Ethnos to Ethno-religion
5
Crossing the Boundary and Becoming a Jew
6
Ioudaizein, "to Judaize"
7
The Rabbinic Conversion Ceremony

PART III: THE BOUNDARY VIOLATED:
THE UNION OF DIVERSE KINDS
8
The Prohibition of Intermarriage
9
The Matrilineal Principle
IO
Israelite Mothers, Israelite Fathers: Matrilineal
Descent and the Inequality of the Convert