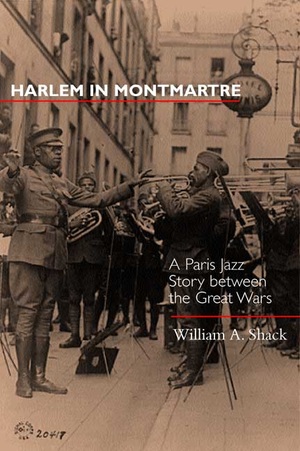 Harlem in Montmartre A Paris Jazz Story between the Great Wars

During the years between the world wars, a small but dynamic community of African American jazz musicians left the United States and settled in Paris, creating a vibrant expatriate musical scene and introducing jazz to the French. While the Harlem Renaissance was taking off across the Atlantic, entertainers in Montmartre, the epicenter of the Parisian scene, contributed enthusiastically to a culture that thrived for two decades, until the occupation of the city by German troops on June 18, 1940. In Harlem in Montmartre, William Shack takes a fascinating look at this extraordinary cultural moment, one in which African American musicians could flee the racism of the United States to pursue their lives and art in the relatively free context of bohemian Europe. His book is the first comprehensive treatment of the rise and decline of the African American music community in Paris; in it, he considers the international dimensions of black experience in the modern era and explores the similarities and differences of Harlem-style jazz and culture in Europe and America.

Shack focuses on some of the principal actors who played critical roles in shaping the jazz scene in Montmartre--Josephine Baker, Sidney Bechet, and Bricktop--but he also discusses others who opened clubs, underwrote loans, and contributed their musical talents to this unparalleled experiment. As an anthropologist, Shack pays particular attention to the club culture. He describes the musicians' experiences, the settings in which they performed, and the response of French audiences.

Shack's meticulous research and encyclopedic knowledge of Montmartre's jazz culture, including the people and places involved, make this a riveting, authoritative work. Seamlessly fusing biographical, sociological, and historical details, he brings this unique era to life and demonstrates how the Paris jazz scene played a crucial role in legitimizing jazz--both in Europe and the United States.

William A. Shack (1923–2000) was Professor of Anthropology at the University of California, Berkeley. Among his books are The Central Ethiopians: Amhara, Tigrina and Related Peoples (1975) and The Gurage: A People of the Ensete Culture (1966).

“Beloved American jazz singer and bandleader Cab Calloway once said, ‘You hear about the Duke Ellingtons, the Jimmy Luncefords, the Fletcher Hendersons, but people sometimes forget that jazz was not only built in the minds of the great ones, but on the backs of the ordinary ones.’ While far from ordinary, Harlem in Montmartre tells the story of the long-forgotten ‘extraordinary ones,’ who left America to create the jazz age in Paris between the First and Second World Wars.”—Business Wire