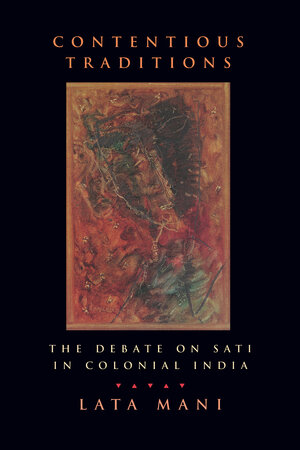 Contentious Traditions The Debate on Sati in Colonial India

Contentious Traditions analyzes the debate on sati, or widow burning, in colonial India. Though the prohibition of widow burning in 1829 was heralded as a key step forward for women's emancipation in modern India, Lata Mani argues that the women who were burned were marginal to the debate and that the controversy was over definitions of Hindu tradition, the place of ritual in religious worship, the civilizing missions of colonialism and evangelism, and the proper role of the colonial state. Mani radically revises colonialist as well as nationalist historiography on the social reform of women's status in the colonial period and clarifies the complex and contradictory character of missionary writings on India.

The history of widow burning is one of paradox. While the chief players in the debate argued over the religious basis of sati and the fine points of scriptural interpretation, the testimonials of women at the funeral pyres consistently addressed the material hardships and societal expectations attached to widowhood. And although historiography has traditionally emphasized the colonial horror of sati, a fascinated ambivalence toward the practice suffused official discussions. The debate normalized the violence of sati and supported the misconception that it was a voluntary act of wifely devotion.

Mani brilliantly illustrates how situated feminism and discourse analysis compel a rewriting of history, thus destabilizing the ways we are accustomed to look at women and men, at "tradition," custom, and modernity.

Lata Mani is an Indian feminist and historian who currently lives in California.

"An important and disturbing book. Lata Mani has reopened the archives on widow burning in colonial India. Her meticulous reading of contemporary texts . . . is exemplary for its conceptual sophistication. Unsettling and illuminating, this is feminist scholarship at its best."—Ranajit Guha, founding editor Subaltern Studies

"Mani's argument that the terms 'tradition' and 'modernity' are inscribed and reinscribed in the bodies of colonized women has forever changed our understandings of patriarchy, nationalism, and colonialism, and indeed redefined the conditions for 'knowing' with respect to these contexts."—Lisa Lowe, author of Immigration Acts

"Lata Mani's brilliant and persuasive analysis of official, native and missionary writings on sati in colonial India makes for a new beginning in contemporary analysis of colonial discourse.This is the book that many have waited for. A landmark publication in several fields at once: modern South Asian history, feminist critiques of colonial discourse, and cultural studies."—Dipesh Chakrabarty, University of Chicago