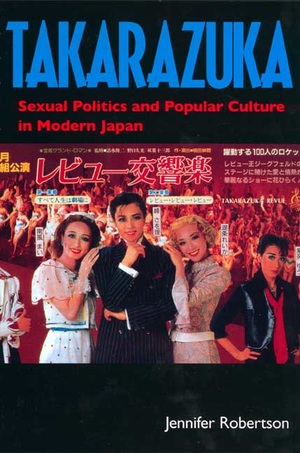 The all-female Takarazuka Revue is world-famous today for its rococo musical productions, including gender-bending love stories, torridly romantic liaisons in foreign settings, and fanatically devoted fans. But that is only a small part of its complicated and complicit performance history. In this sophisticated and historically grounded analysis, anthropologist Jennifer Robertson draws from over a decade of fieldwork and archival research to explore how the Revue illuminates discourses of sexual politics, nationalism, imperialism, and popular culture in twentieth-century Japan.

The Revue was founded in 1913 as a novel counterpart to the all-male Kabuki theater. Tracing the contradictory meanings of Takarazuka productions over time, with special attention to the World War II period, Robertson illuminates the intricate web of relationships among managers, directors, actors, fans, and social critics, whose clashes and compromises textured the theater and the wider society in colorful and complex ways.

Using Takarazuka as a key to understanding the "logic" of everyday life in Japan and placing the Revue squarely in its own social, historical, and cultural context, she challenges both the stereotypes of "the Japanese" and the Eurocentric notions of gender performance and sexuality.

Jennifer Robertson is Professor of Anthropology at the University of Michigan, and author of Native and Newcomer: Making and Remaking a Japanese City (California, 1991).

"Jennifer Robertson casts the Takarazuka Revue as a hybrid protagonist in her innovative and demystifying analysis of sexual, social, and national order and disorder in twentieth-century Japan."—Carroll Smith-Rosenberg, author of Disorderly Conduct: Visions of Gender in Victorian America 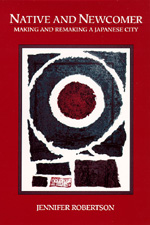