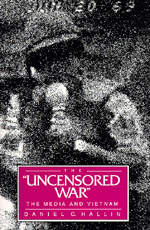 The Uncensored War The Media and Vietnam, With a new preface

This book was finished in the tenth year after the end of the Vietnam War. The year 1985 was also the year of Rambo, and of a number of other celebration of the Vietnam War in popular culture. It was the year Congress cut off aid to the "Contras" in Nicaragua, and then abruptly reversed itself and approved "humanitarian" aid to support the guerrilla war in that country. The "Vietnam Syndrome" showed signs of giving way tot he "Grenada Syndrome": the fear of repeating the Vietnam experience showed signs of giving way to a desire to relive it in an idealized form. The nation seemed deeply confused about its identity as an actor in world politics, and thus particularly vulnerable to appealing myths. So it is a good time to take a sober look back and the nation's consciousness during the Vietnam War itself--which as we shall see, despite the popular image of an independent media demolishing the nation's illusions, was also governed by a powerful mythology, born in part out of the traumas of earlier wars.

Daniel C. Hallin is Professor of Communications and Adjunct Professor of Political Science at the University of California, San Diego.

"The role of the U.S. press in the Vietnam war, the subject of persistent controversy for more than a decade, raises important issues for journalism, government and American society as a whole. Here is a first-rate book which throws new light on the topic rather than generating more passion and which is based on scholarly analysis of what actually was published and broadcast, judged in the context of historical events."--Don Obardorfer, Washington Post Book World "A rigorous look at media coverage and performance. . . . This is a book worth reading--must reading for those who have made up their minds about the press and Vietnam. It may change some minds, or at least open them up a bit."--Col. Wallace B. Eberhard, Military Review "Hallin's well-written, important study shows the real meaning of press-government relations during the Vietnam era is to be found not in their controversies, but in the failure of historical understanding common to both sides."--Arnold R. Isaacs, Philadelphia Inquirer

NOTES
BIBLIOGRAPHY
APPENDIX A: Abbreviations
APPENDIX B: Code Book with Marginals for Some Variables
INDEX