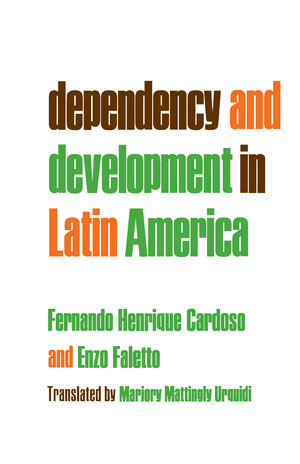 Dependency and Development in Latin America

At the end of World War II, several Latin American countries seemed to be ready for industrialization and self-sustaining economic growth. Instead, they found that they had exchanged old forms of political and economic dependence for a new kind of dependency on the international capitalism of multinational corporations. In the much-acclaimed original Spanish edition (Dependencia y Desarrollo en América Latina) and now in the expanded and revised English version, Cardoso and Faletto offer a sophisticated analysis of the economic development of Latin America.

The economic dependency of Latin America stems not merely from the domination of the world market over internal national and “enclave” economies, but also from the much more complex interact ion of economic drives, political structures, social movements, and historically conditioned alliances. While heeding the unique histories of individual nations, the authors discern four general stages in Latin America's economic development: the early outward expansion of newly independent nations, the political emergence of the middle sector, the formation of internal markets in response to population growth, and the new dependence on international markets. In a postscript for this edition, Cardoso and Faletto examine the political, social and economic changes of the past ten years in light of their original hypotheses.