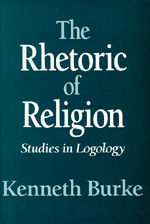 The Rhetoric of Religion Studies in Logology

"But the point of Burke's work, and the significance of his achievement, is not that he points out that religion and language affect each other, for this has been said before, but that he proceeds to demonstrate how this is so by reference to a specific symbolic context. After a discussion 'On Words and The Word,' he analysess verbal action in St. Augustine's Confessions. He then discusses the first three chapters of Genesis, and ends with a brilliant and profound 'Prologue in Heaven,' an imaginary dialogue between the Lord and Satan in which he proposes that we begin our study of human motives with complex theories of transcendence,' rather than with terminologies developed in the use of simplified laboratory equipment. . . . Burke now feels, after some forty years of search, that he has created a model of the symbolic act which breaks through the rigidities of the 'sacred-secular' dichotomy, and at the same time shows us how we get from secular and sacred realms of action over the bridge of language. . . . Religious systems are systems of action based on communication in society. They are great social dramas which are played out on earth before an ultimate audience, God. But where theology confronts the developed cosmological drama in the 'grand style,' that is, as a fully developed cosmological drama for its religious content, the 'logologer' can be further studied not directly as knowledge but as anecdotes that help reveal for us the quandaries of human governance." --Hugh Dalziel Duncan from Critical Responses to Kenneth Burke, 1924 - 1966, edited by William H. Rueckert (Minneapolis: University of Minnesota Press, 1969).

Kenneth Duva Burke (May 5, 1897 - November 19, 1993) was an American literary theorist and critic.  Burke was awarded the following:Creative Arts Award from Brandeis University in 1967National Endowment for the Arts award in 1968National Council on the Arts award in 1969Gold medal from the National Institute of Arts and Letters in 1975National Medal for Literature in 1981Elmer Holmes Bobst Award in 1984 And the following fellowships: Princeton Institute for Advanced Study (1949)Stanford University (1957)Rockefeller Foundation (1966) 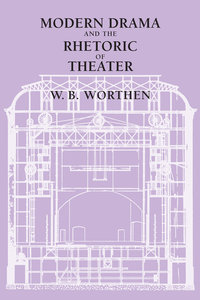 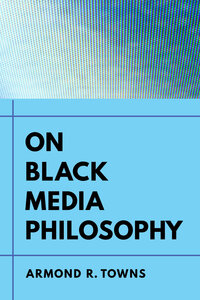