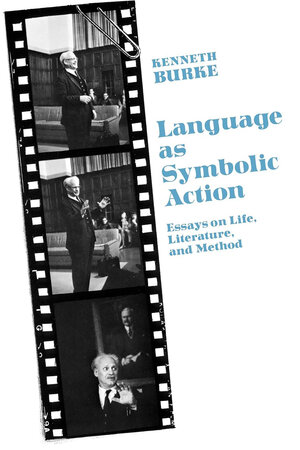 Language As Symbolic Action Essays on Life, Literature, and Method

From the Preface:The title for this collection was the title of a course in literary criticism that I gave for many years at Bennington College. And much of the material presented here was used in that course. The title should serve well to convey the gist of these various pieces. For all of them are explicitly concerned with the attempt to define and track down the implications of the term "symbolic action," and to show how the marvels of literature and language look when considered form that point of view.

Kenneth Burke was a self-taught thinker who attempted to integrate scientific and philosophical concepts with his analysis of semantics and literature. Between 1927 and 1929, Burke worked for the "Dial "as a music critic. After a brief stint with "The Nation "(1934-36), he turned to literary criticism and taught at Bennington College from 1943 to 1961. His many works have all been published by the University of California Press.

"Language as Symbolic Action, as its subtitle tells us, collects under a single cover many of Burke's essays which have appeared in widely diverse periodicals. In some respects Burke has been an eminence gris on the academic and scholarly scene. His wide-ranging interests have placed many of his most important essays in obscure periodicals, and they have produced syntheses whose brilliance is matched only by the difficulties of reading they have posed for often too narrowly trained specialists. And, without a formal training in an academic discipline, he has seldom surveyed the work of the men on whom he has drawn. Very often the reader who has not read Ogden and Richards, Korzybski, Nietzsche, and Freud--to name only a few--finds Burke very difficult going at best. In many respects Language as Symbolic Action presents Burke at his best. In these essays he is most completely his own man and least dependent on his sources; these essays demand less prior knowledge on the part of the reader. Here the structure of "collected essays" allows the reader to move from the inductive development of basic notions to their specific applications in literary criticism, rhetoric, and language. In many ways Language as Symbolic Action provides a reader new to Burke with an excellent introduction to his most mature work." Reviewed by: Nelson J. Smith, IIIPhilosophy & RhetoricVol. 1, No. 3 (Summer, 1968), pp. 187 - 189