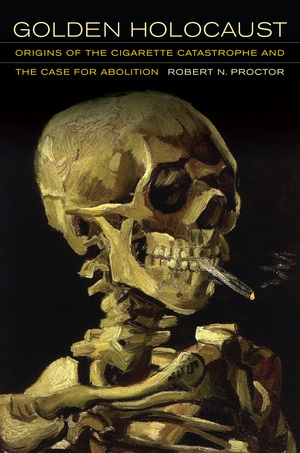 The cigarette is the deadliest artifact in the history of human civilization. It is also one of the most beguiling, thanks to more than a century of manipulation at the hands of tobacco industry chemists. In Golden Holocaust, Robert N. Proctor draws on reams of formerly-secret industry documents to explore how the cigarette came to be the most widely-used drug on the planet, with six trillion sticks sold per year. He paints a harrowing picture of tobacco manufacturers conspiring to block the recognition of tobacco-cancer hazards, even as they ensnare legions of scientists and politicians in a web of denial. Proctor tells heretofore untold stories of fraud and subterfuge, and he makes the strongest case to date for a simple yet ambitious remedy: a ban on the manufacture and sale of cigarettes.

Robert N. Proctor is Professor of the History of Science at Stanford University and author of Cancer Wars, Racial Hygiene, and The Nazi War on Cancer He is also a Fellow of the American Academy of Arts and Sciences.

“Draws on previously confidential industry documents and Proctor’s own experience as the first historian to testify in court about the lies of Philip Morris, R.J. Reynolds, & co. What lies? How deep into the pleural linings did they go? All the way, from cancer stats so dire they had to be falsified before they were hidden, to the rank slogans that hung like a fug over Madison Avenue.”—Harper's Magazine

“A devastating new compendium of the tobacco industry's sins that lays out in head-shaking detail how a handful of companies painstakingly designed, produced, and mass-marketed the most lethal product on the planet.”—Mother Jones

“[A] monumental and sobering indictment.”—Nature

“Robert N. Proctor . . . has written a nearly 800-page book that begins as the Bible of the twentieth-century cigarette industry only to end as its millennial counterblaste.”—Joshua Cohen Harper's

“Proctor challenges his readers to conceptualize a much happier and healthier world in which the manufacture and sale of cigarettes is prohibited. . . . Maybe the tobacco industry's longtime claim that choosing to smoke is an ‘exercise in freedom’ is a farce.”—The Huffington Post

“A landmark study in medicine and the history of science, and of an industry [Proctor] describes as ‘evil.’”—Toronto Globe & Mail

“Proctor’s extensive use of previously secret tobacco industry documents makes his case convincing, even compelling. His narrative couples careful, thoroughly documented, analysis of the history of cigarette design, cigarette marketing and cigarette science with a moral outrage that is almost palpable. . . . While Proctor’s message is clearly impassioned, it is also thoroughly considered at every turn. . . . Proctor’s words are anything but weak, his outrage at the needless suffering caused by the tobacco industry, clear. In drawing attention to the evils perpetrated by the tobacco industry over the last half-century Proctor has made his intervention. His history of the origins of the cigarette catastrophe and the case he makes for its abolition are convincing, and will surely be welcomed by the global health community.”—Katherine E. Kenny Sociology/Science Studies, University of California San Diego Global Public Health

“Academic research critical of the cigarette is hardly new, but Robert N. Proctor makes an important contribution. . . . He provides a meticulously detailed description of tobacco industry efforts to respond to the challenge presented from the 1950s to the 1990s by medical research linking cigarettes to disease. . . . An invaluable reference for historians interested in the tobacco industry, health and medicine, or marketing in the twentieth century.”—Karen Miller Russell, University of Georgia Jrnl Of American History

“A comprehensive and devastating account of tobacco industry perfidy in promoting the sale of its deadly cigarettes. . . . Proctor relentlessly and convincingly reveals the jarring discrepancies between the tobacco industry’s private knowledge and its public announcements.”—Barron H. Lerner, New York University School of Medicine Bulletin Of The History Of Medicine

“An impassioned indictment of the U.S. tobacco industry. . . . This is a historian’s testimony on his own terms. . . . Entertaining and hard-hitting. . . . The sheer amount of evidence Proctor marshals from the industry’s own archives will uphold the uncompromising verdict he renders.”—Carol Benedict, Georgetown University American Historical Review

“Shines a bright light not only on the actions of the cigarette manufacturers but also on the unholy collaboration of the scientific and academic communities in the cigarette manufacturers’ 50-year conspiracy to distort and deny the scientific evidence establishing the disease consequences of active and passive smoking. . . . A passionate work and not for the faint of heart.”—American Journal Of Epidemiology

“Engaging, inexhaustible with information, and driven.”—Chronicle Of Higher Education

"Proctor’s book will be of great interest . . . it debunks fraudulent industry claims past and present, provides credible arguments for banning cigarettes, and delineates steps to take before abolition is politically possible. . . . For historians, Proctor’s book particularly calls for serious conversation about ethics and best practices in our era of decreased public support of universities and rising dependence on corporate donors."—Nan Enstad Journal of the History of Medicine

“The great cause of global health is in Robert Proctor’s debt. Golden Holocaust is a model of impassioned scholarly research and advocacy. As Proctor so powerfully demonstrates, the time has come to hold the tobacco industry accountable for the massive disease, debility, and death that they produce around the world.”--Allan M. Brandt, author of The Cigarette Century

"Robert Proctor unpacks the sad history of an industrial fraud. His tightly reasoned exploration touches on all topics on which the tobacco makers lied repeatedly to Congress and the public."--Don Kennedy, President Emeritus, Stanford University and former Editor, Science

"This book is a remarkable compendium of evil. It will keep you spinning from page one through the last with a detailed description of how one of the most notorious industries in American history deceived and manipulated the public, the politicians, and the scientific community into allowing an age-old toxin to be breathed directly into the lungs of millions of Americans. It is the type of book that makes you wonder how, in God’s name, this could have happened?"-David Rosner, author of Deceit and Denial

"Proctor powerfully documents how a small number of tobacco companies caused a tragic, global epidemic. His account of this history and of the 'lessons learned' is relevant to the ongoing effort to end the tobacco epidemic and to efforts to control emerging pandemics of non-communicable diseases." --Jonathan M. Samet, M.D., M.S., Director, Institute for Global Health, University of Southern California

“Proctor weaves together the public historical record with inside details and insights from thousands of once secret industry documents. Anyone who cares about health, deception, science or politics will learn something new from this book.”-Stanton A. Glantz, Professor of Medicine, UC San Francisco, and author of The Cigarette Papers

"By carefully analyzing formerly secret industry documents, Proctor has shown how cigarette manufacturers knew that the "filters" on virtually all cigarettes sold today are utterly fraudulent. His call for a ban is likely to change how we think about such devices; this excellent book is a must read for tobacco control and environmental activists alike."--Thomas E. Novotny, MD MPH, Former US Assistant Surgeon General and CEO, Cigarette Butt Pollution Project.

"Scholarly yet eminently readable, indeed gripping, this book asks us to consider what the end game for tobacco might look like. A must-read for policy makers and public health officials, and for anyone struggling against the tobacco industry in the field."--Professor Judith Mackay, Senior Advisor, World Lung Foundation, Hong Kong, China SAR"

"The machine-rolled cigarette is the single most deadly consumer product ever made. Proctor's powerful, witty, and wide-ranging book shows how we came to accept as normal the promotion and use of products that have caused a global epidemic of disease and death. But more importantly, he outlines a way to end this grim chapter in human history."--Ruth E. Malone, RN, PhD, FAAN, Editor, Tobacco Control

“This is the most important book on smoking in fifty years. Proctor’s unique mix of scholarship, readability, wit and political understanding tells a no-holds-barred story with conclusions that governments cannot afford to ignore. It will change the course of public health history.”--Professor Mike Daube, President, Australian Council on Smoking and Health

"Proctor draws masterfully from a vast archive of documents wrested from the industry, including many never before discussed, and mounts an unforgettable case about what the tobacco industry has done and what we must do about it. This is the book to help us understand what we must do to save lives."--Peter Galison, author of Einstein's Clocks, Poincaré’s Maps

"Golden Holocaust will stand indelibly as a landmark in the field of medicine and the history of science. It is a monument of committed scholarship and cool passion, making brilliant use of the new technics of data-mining to reveal a terrible calculus, while giving the lie to claims that advocacy must be the enemy of objectivity. Lives, far too many lives, depend on what this book contains."--Iain Boal, Birkbeck College, London and Guggenheim Fellow in Science and Technology

"Robert Proctor draws an unvarnished conclusion: that the tobacco industry, and the men who led it, were evil, plain and simple. They knowingly sold a product that, when used as intended, killed people. And then they conspired to suppress the evidence. Not everyone will agree with Proctor, but anyone interested in the intertwined issues of science and health, and culture and commerce, needs to read this book."--Naomi Oreskes, coauthor of Merchants of Doubt

“Robert Proctor lays bare the deliberate choices made by the tobacco companies to addict their customers and cause premature death. Here is clarity to the unprecedented scientific fraud perpetrated by the tobacco industry.”--William A. Farone, Ph.D. Chairman, Applied Power Concepts, Inc. (formerly Director of Scientific Research for Philip Morris USA, 1977-1984).

List of Illustrations
Prologue
Introduction: Who Knew What and When?

PART FOUR. Radiant Filth and Redemption
25. What’s Actually in your Cigarette?
26. Radioactivity in Cigarette Smoke: “Three Mile Marlboro” and the Sleeping Giant
27. The Odd Business of Butts—and the Global Warming Wild Card
28. “Safer” Cigarettes?
29. Globalizing Death
30. What Must Be Done