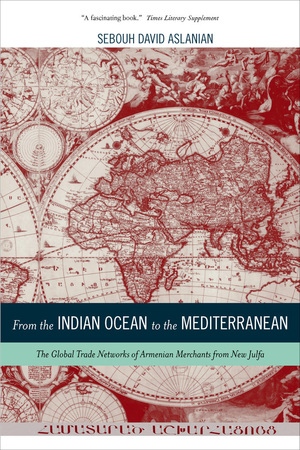 “Aslanian has unearthed a veritable treasure trove, and this book, which is written in a lucid style, is of great interest.”—The Historian

“This is the kind of book that entices readers to spend time not only with the text but also with the bibliography and endnotes, retracing research steps and finding new paths to benefit their own work.”—Patricia Risso American Historical Review

“An extensively researched study . . . that is both scholarly and interesting to read. . . . Well written and well-documented.”—Daphne Abeel Armenian Mirror-Spectator

“. . .the book is an historian’s book for historians.”—Daphne Abeel Armenian Mirror-Spectator

"Sebouh David Aslanian draws upon an unrivaled body of original documentation, collected in seven languages from twenty-five archives, to reconstruct in great detail the logic and working of a global commercial network. He poses a series of fundamental questions concerning the Julfan network and critically assesses both the received literature and the very documentation on which he grounds his revisionist study, making this a valuable contribution to comparative economic history."


Edward Alpers, author of East Africa and the Indian Ocean

"From the Indian Ocean to the Mediterranean is without question an exceptionally interesting, well-researched, and original study. The work is the product of lengthy and determined exploratory archival research whose global reach reflects the far-flung trading network of Aslanian’s subject. Compared to previous work on the Julfa Armenians (or the trade of the Safavid Empire in general), it is on an altogether higher level of theoretical sophistication."

Edmund Herzig, editor of Iran and the World in the Safavid Age