The transatlantic slave trade forced millions of Africans into bondage. Until the early nineteenth century, African slaves came to the Americas in greater numbers than Europeans. In the Shadow of Slavery provides a startling new assessment of the Atlantic slave trade and upends conventional wisdom by shifting attention from the crops slaves were forced to produce to the foods they planted for their own nourishment. Many familiar foods—millet, sorghum, coffee, okra, watermelon, and the “Asian” long bean, for example—are native to Africa, while commercial products such as Coca Cola, Worcestershire Sauce, and Palmolive Soap rely on African plants that were brought to the Americas on slave ships as provisions, medicines, cordage, and bedding. In this exciting, original, and groundbreaking book, Judith A. Carney and Richard Nicholas Rosomoff draw on archaeological records, oral histories, and the accounts of slave ship captains to show how slaves' food plots—“botanical gardens of the dispossessed”—became the incubators of African survival in the Americas and Africanized the foodways of plantation societies.

Judith A. Carney is Professor of Geography at the University of California, Los Angeles. She is the author of the award-winning book Black Rice: The African Origins of Rice Cultivation in the Americas. Richard Nicholas Rosomoff is an independent writer.

“An important contribution to literature on the Columbian Exchange . . . . Carney and Rosomoff provide the first step in a needed revision of Columbian Exchange historiography.”—Frederick Douglass Opie Agricultural History Review

“Carney and Rosomoff’s volume now takes its place as essential reading for anyone trying to understand the long-ignored interaction between environmental change, global commerce, natural knowledge, and slavery.”—Times Higher Education

“In the Shadow of Slavery is thorough, cogent, creative in its use of scarce historical materials, and beautifully illustrated with color plates.”—Susanne Freidberg Intl Journal Of African Historical Stds

“Essential to any environmentally informed study of slavery in the Americas.”—Isle: Interdis Stds In Lit & Environ

“This is a wonderful book, one I will recommend to colleagues, friends, and family alike.”—Common-Place

“Professor Moykr has presented us with a useful, entertaining, and exacting analysis of those theories and debates that have engaged economic historians for the last quarter-century.”—Technology And Culture

“A very readable account that envelops a sobering look at [the] slave trade.”—American Herb Assoc Newsletter

“Carney and Rosomoff have crafted an engaging and compelling narrative that opens our eyes and awakens our palates to the multiple ways in which our American foodways have been fundamentally shaped by Africa and Africans. . . . I highly recommend it to all.”—Henry John Drewal, University of Wisconsin Economic Botany

"This book offers something truly new and profound about the Black Atlantic: a glimpse of the presence of African foods, plants, and bodies of everyday knowledge that define Africa's subtle but persistent presence in the Atlantic World and beyond. Food, survival, and human ingenuity. Great stuff."—James C. McCann, author of Maize and Grace: Africa's Encounter with a New World Crop

“Today, many people are thinking differently, and more deeply, about food, slavery, and globalization. No one can connect these diverse topics more effectively than Judith Carney. Building on her pioneering study, Black Rice, Carney's absorbing new book—coauthored with Richard Nicholas Rosomoff—is original, wide-ranging, and provocative. Like a bountiful African gourd vine, this remarkable overview spreads in many directions and bears impressive fruit.”—Peter H. Wood, author of Strange New Land: Africans in Colonial America

"In this highly original study, Judith Carney deliberately bypasses the huge (and hugely cruel) investment of slave labor power in the direct production of planter wealth. She offers in its place the less familiar chronicle of slave subsistence, and uncovers the essential role that African agricultural history had played in establishing and sustaining it. In the Shadow of Slavery goes back to Mother Africa, to shed new light on the Old World's part in the building of the New."—Sidney W. Mintz, author of Sweetness & Power and Three Ancient Colonies (forthcoming)

"Judith Carney has written a brilliant green history of the Black Atlantic, illuminating in creative, path-blazing ways the globalization of the magnificent African commons."—Marcus Rediker, author of The Slave Ship: A Human History

“In the Shadow of Slavery unveils an epic saga of global foodways involving African peoples and their African-American descendants. The authors brilliantly craft the historical and geographic story of the stuggle to ensure the survival of their cultural-natural heritage, and the evolution of that heritage in the trans-Atlantic agrarian landscapes.”—Karl S. Zimmerer, editor of Globalization and New Geographies of Conservation

"A fresh look at the African diaspora's far-reaching consequences by examining its effects on subsistence foods on both sides of the Atlantic. Carney provides a new understanding of the contributions that enslaved Africans made to American culture. An outstanding work."—Gail E. Wagner, University of South Carolina

"Following on the heels of her magnificent book Black Rice, Judith Carney delves deeper into the invisible history of the Black Atlantic's foodways. She provides nothing less than a radical re-reading of the role of Africans in shaping not simply New World agrarian systems but the ways in which food was processed, how animals were reared, husbanded and tended, and how African knowledge and practice contributed to the global table. In the Shadow of Slavery is a remarkable narrative achievement, a rich account of endurance, innovation, survival, travel and historical memory nourished not so much on the estates and plantations as on the slave plots, and in the hearths and kitchens of those who survived the Middle Passage. A tour de force."—Michael Watts, editor of Curse Of The Black Gold: 50 Years of Oil in the Niger Delta

“In this brilliant book, Judith Carney charts the diaspora of African flora that resulted largely as an unintended consequence of the forced migration of Africans from the Old World to the New. European slave ships unwittingly carried Africa's botanical heritage along with the people who valued it to the Americas. Africans cultivated foods crucial to their very survival in what Carney beautifully styles 'botanical gardens of the dispossessed'. A must-read for anyone interested in the circulation of plants, peoples, and competing knowledges in the Atlantic World.”—Londa Schiebinger, author of Plants and Empire: Colonial Biopropsecting in the Atlantic World 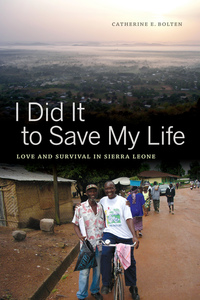 I Did It to Save My Life