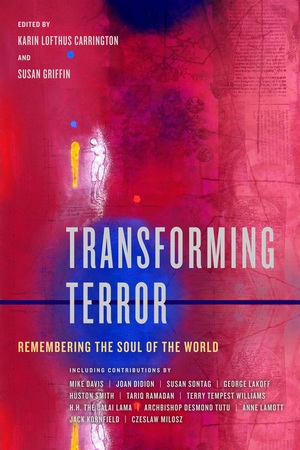 Transforming Terror Remembering the Soul of the World

This inspired collection offers a new paradigm for moving the world beyond violence as the first, and often only, response to violence. Through essays and poetry, prayers and meditations, Transforming Terror powerfully demonstrates that terrorist violence—defined here as any attack on unarmed civilians—can never be stopped by a return to the thinking that created it. A diverse array of contributors—writers, healers, spiritual and political leaders, scientists, and activists, including Desmond Tutu, Huston Smith, Riane Eisler, Daniel Ellsberg, Amos Oz, Fatema Mernissi, Fritjof Capra, George Lakoff, Mahmoud Darwish, Terry Tempest Williams, and Jack Kornfield—considers how we might transform the conditions that produce terrorist acts and bring true healing to the victims of these acts. Broadly encompassing both the Islamic and Western worlds, the book explores the nature of consciousness and offers a blueprint for change that makes peace possible. From unforgettable firsthand accounts of terrorism, the book draws us into awareness of our ecological and economic interdependence, the need for connectedness, and the innate human capacity for compassion.

Karin Lofthus Carrington is a psychotherapist, consultant, writer, and teacher whose work focuses on the interrelationship of psychology, spirituality, and social conscience. She developed curriculum for the graduate program in Transpersonal Psychology at John F. Kennedy University, served as adjunct faculty for the Masters program in depth psychology at Pacifica Graduate University, and was the psychological consultant to the American Women's Annapurna Expedition. Susan Griffin, whose best selling book A Chorus of Stones was a finalist for the Pulitzer Prize, was named by the Utne Reader as one of the new millennium’s 100 most important visionaries. She has received grants from the Guggenheim Foundation and the National Endowment for the Arts, and a MacArthur Foundation grant for Peace and International Cooperation.

“A book and an unexploded bomb may lay equally motionless, but their kinetic potential is vastly different. A bomb may kill hundreds of people, but a book can change millions—think of Common Sense, Das Kapital, Uncle Tom’s Cabin, or The Gulag Archipelago. To that energizing company, add Transforming Terror. This practical, inspiring book cuts through moral relativism by defining terror according to how it affects its victims. It is a luminous collection of wisdom. You’ll want many of these essays in your library forever. I needed to read it and you do, too.” -Peter Coyote, actor and author of Sleeping Where I Fall

“Only an anthology could create the mosaic that would display the profound paradigm shift offered here: defining terrorism according to the experiences of the victims—unarmed civilians who are violently attacked or threatened—and not by any ideology or purpose. Each tile in the mosaic offers a catalyst to radical transformation of the calamitously increasing scale of such assaults, from suicide bombers to state terrorism, and offers real hope for a way out of the death spiral. This should be read at military academies and defense departments as well as by teachers and religious leaders.” -Deirdre English, Director, Felker Magazine Center, Graduate School of Journalism, UC Berkeley and former editor of Mother Jones

“This collection of writings reveals a wealth of proposals for transforming the combustible conditions that often produce terror, as well as for the reconciliation and healing of terror’s victims. This book is not only an inspired and singular achievement, it is a courageous and bold challenge to a world too often jaded and numbed by the omnipresence of violence to consider any creative alternatives. Here is a work that couldn’t be more timely, relevant or persuasive in its call for us to transform the terror that bedevils us all, individuals and cultures alike.” - Phil Cousineau, author of Beyond Forgiveness: Reflections on Atonement and A Seat at the Table: Huston Smith in Conversation with Native Americans on Religious Freedom


"This volume brings together the wisest voices of our era to reveal the prevalence of terror in our world, and its unconsidered consequences. Until a behavior has a name, it cannot be challenged. This amazing collection of wise and beautiful voices challenges our received definition of terror, and moves us a step further toward a world of peace.” - Marilyn Sewell, editor of Cries of the Spirit
Read More >