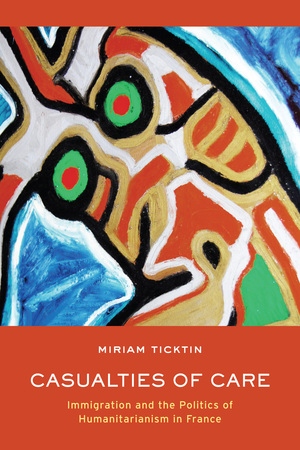 Casualties of Care Immigration and the Politics of Humanitarianism in France

Sans-Papiers and the Context of Political Struggle

On October 27, 2005, responding to a call about a break-in, French police chased three young boys of Arab origin in the cité (housing estate) of Clichy-sous-Bois. The boys climbed the wall of a power plant in their attempt to escape the police, and two of the boys, aged fifteen and seventeen, died, while the third suffered from severe burns. Later it was recognized that the police had chased the boys by mistake and that there was no burglary. The boys had been playing soccer with their friends in the neighborhood and had dispersed to avoid the all too familiar police harassment. In response to this event, France erupted in what were called urban "riots," which lasted for over three weeks, burning ten thousand cars and causing the arrest of nearly five thousand people. This was just three days after then-interior minister Nicolas Sarkozy said that he would rid the banlieue area of Argenteuil of racaille (scum or riffraff), by which he meant youth of immigrant origin. In response to the events, the government declared a state of emergency, using a 1955 law originally passed during the war of independence in Algeria-a move that rendered all too apparent how the borders between metropole and colony had never fully disappeared, but rather had been resurrected in new ways within the metropole itself.

These so-called riots-perhaps more accurately labeled "revolts" to recognize their political nature-opened a space in France to discuss questions of economic inequality, racial discrimination, policing, and segregation for those of immigrant descent. Quite suddenly, it seemed, France's postcolonial status was no longer a public secret: it appeared in full view, in newspapers all over the world and, more importantly, in France itself. I open with this event as one of the most visible recent political eruptions in France of the tensions surrounding questions of immigration, labor, and their related colonial histories. In other words, this was not a sudden crisis; as the "banlieue film" La Haine (Hate) had already demonstrated in 1995, in its prescient fictional depiction of riots caused by police brutality against youth of immigrant origin, it is an ongoing, unresolved s

This book explores the unintended consequences of compassion in the world of immigration politics. Miriam Ticktin focuses on France and its humanitarian immigration practices to argue that a politics based on care and protection can lead the state to view issues of immigration and asylum through a medical lens. Examining two “regimes of care”—humanitarianism and the movement to stop violence against women—Ticktin asks what it means to permit the sick and sexually violated to cross borders while the impoverished cannot? She demonstrates how in an inhospitable immigration climate, unusual pathologies can become the means to residency papers, making conditions like HIV, cancer, and select experiences of sexual violence into distinct advantages for would-be migrants. Ticktin’s analysis also indicts the inequalities forged by global capitalism that drive people to migrate, and the state practices that criminalize the majority of undocumented migrants at the expense of care for the exceptional few.

Miriam Ticktin is Assistant Professor of Anthropology at the New School for Social Research.

“Illuminating. . . . An important contribution to the study of the struggle for rights by migrant movements in Europe.”—Catherine Lloyd, Edinburgh, Scotland Signs: Journal Of Women In Culture And Society

“Explores problematic aspects of a humanitarian immigration policy that allows entry by migrants who have suffered sexual abuse, or are AIDS or cancer patients for example, but blocks immigration by the simply impoverished.”—Chronicle Of Higher Education

"Casualties of Care is a well crafted, intelligent and carefully argued study of the social and policy effects of a seemingly benevolent set of 'humanitarian practices' used in the French immigration and asylum processes. One of the leading anthropologists of humanitarianism, Miriam Ticktin is well placed to write this definitive study, having undertaken nearly ten years of thorough ethnographic research in France. Her research findings draw from ethnographic interviews and participant observation as well as broader, more structural data on the movement of foreign labor within the French economy." --Richard Ashby Wilson, Gladstein Chair of Human Rights, University of Connecticut

"Ticktin cuts to the heart of contemporary concerns, speaking provocatively and incisively about humanitarianism and security through the topic of immigration." --Peter Redfield, Associate Professor of Anthropology at the University of North Carolina, Chapel Hill

Introduction: The Politics and Antipolitics of Care

Part I The Context: Politics and Care
1. Sans-Papiers and the Context of Political Struggle
2. Genealogies of Care: The New Humanitarianism

Part II:  On the Ground: Compassion and Pathology
3. The Illness Clause: Life and the Politics of Compassion
4. In the Name of Violence against Women