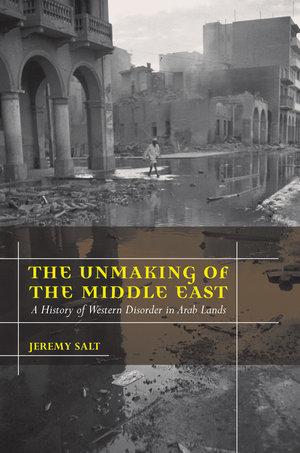 Written for those who want to know more about the Middle East than the mainstream media is willing or able to tell, this book begins by examining a question that has been asked by numerous commentators since September 11, 2001: “Why do they hate us?" Jeremy Salt offers the background essential for understanding the Middle East today by chronicling the long and bloody history of Western intervention in Arab lands. In lucid detail, he examines the major events that have shaped the region—ranging from the French in Algeria and the British in Egypt in the nineteenth century to the Palestinian-Israeli conflict and to the continuing war in Iraq. Linking all of these together, Salt paints a damning picture of a sustained campaign by Western powers to dominate the Middle East by whatever means necessary. Throughout, he emphasizes the human cost of the policies put in place to preserve "Western interests" or in the name of bringing civilization, democracy, or freedom to the region. Making use of extensive research in U.S. and British archives that reveals what politicians were deciding behind closed doors, and why, this is a book that will change the way we see the Middle East.

Jeremy Salt teaches in the Department of Political Science at Bilkent University in Ankara and is author of Imperialism, Evangelism, and the Ottoman Armenians, 1878-1896.

“A blistering, well-documented Philippic that will provide considerable sources for reflection and should be mandatory reading for all Western policy makers, academics and intelligent lay public thinking about yet another invasion of any Middle Eastern state. . . . Salt offers a necessary diatribe about how the West too often has spoken idealistically while performing brutally in the Middle East.”—Cookeville Herald-Citizen

"Devastating in its portrayal of the depths to which the West (France, Britain, and the US especially) sank in conquering the Middle East. Starting off with Huntington's quote about 'Islam's bloody borders,' Salt argues that it was the West that made these borders bloody, though in the process it had no trouble finding native accomplices who helped, wittingly or not."—Mehran Kamrava, author of The Modern Middle East

"This will be of much use to general readers who are ill-served by the preponderance of books in the marketplace that explain political events by recourse to stereotypical representations of 'Arabs' and 'Islam,' while neglecting important historical events that define current political and social reality in the region. None of the general history books on the Middle East offer comparable comprehensive details."—Joseph A. Massad, author of Desiring Arabs

"This excellent book is comprehensive in scope, scholarly and yet highly readable. Focusing on the damaging role of western policy in the Middle East, well exemplified in the current debacle in Iraq. It will be essential reading for students and historians of the region."—Ghada Karmi, author of Married to Another Man: Israel's Dilemma in Palestine


"Salt makes it abundantly clear that when it comes to the Middle East, 'the West' talks idealistically and acts brutally. This excellent book should be required reading for future American policymakers thinking about invading another Arab or Islamic country."—John J. Mearsheimer, R. Wendell Harrison Distinguished Service Professor of Political Science at the University of Chicago
Read More >

PART I. “WHY DO THEY HATE US?”
1. Civilization and Its Contradictions
2. Science and Barbarism