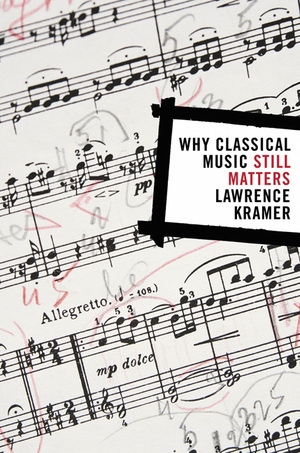 “What can be done about the state of classical music?” Lawrence Kramer asks in this elegant, sharply observed, and beautifully written extended essay. Classical music, whose demise has been predicted for at least a decade, has always had its staunch advocates, but in today’s media-saturated world there are real concerns about its viability. Why Classical Music Still Matters takes a forthright approach by engaging both skeptics and music lovers alike.

In seven highly original chapters, Why Classical Music Still Matters affirms the value of classical music—defined as a body of nontheatrical music produced since the eighteenth century with the single aim of being listened to—by revealing what its values are: the specific beliefs, attitudes, and meanings that the music has supported in the past and which, Kramer believes, it can support in the future.

Why Classical Music Still Matters also clears the air of old prejudices. Unlike other apologists, whose defense of the music often depends on arguments about the corrupting influence of popular culture, Kramer admits that classical music needs a broader, more up-to-date rationale. He succeeds in engaging the reader by putting into words music’s complex relationship with individual human drives and larger social needs. In prose that is fresh, stimulating, and conversational, he explores the nature of subjectivity, the conquest of time and mortality, the harmonization of humanity and technology, the cultivation of attention, and the liberation of human energy.

Lawrence Kramer is Professor of English and Music at Fordham University and editor of 19th-Century Music. His many books include Opera and Modern Culture: Wagner and Strauss (2004), Classical Music and Postmodern Knowledge (1995), After the Lovedeath: Sexual Violence and the Making of Culture (1997), and Musical Meaning: Toward a Critical History (2002), all from the University of California Press.

“Absorbing book. . . . These discoveries have seldom been discussed with greater eloquence.”—Australian Book Review

“[Kramer] searches for answers that will resonate not only with lovers of classical music but also with novice listeners and skeptics who proclaim that classical music is facing extinction. . . . [H]e provides readers with the essential vocabulary to understand, actively engage with, and give meaning and value to classical music in our contemporary popular culture.”—Library Journal

“[Kramer] is a wonderfully elegant writer and a persuasive debater who puts his case with great clarity and genuine depth of thought.”—Sydney Morning Herald

“Mr. Kramer traces his passionate, persuasive argument through chapters on the significance of melody, the transcendent effect of song, the particular appeal of the piano and music as a repository of mythic images.”—The Economist

"Wow. Kramer succeeds at what is a fantastically difficult task: to seduce readers into a powerful engagement with classical music by portraying in words its complex entanglements with fundamental human drives and social needs. Ranging from J.S. Bach to John Adams, the author shows again and again how classical music participates in the exploration of subjectivity, the conquest of time and mortality, the harmonization of humanity and technology, the cultivation of attention, and the liberation of human energy. Matching some of the most famous descriptive musical prose of the modern era, Kramer uses his extraordinary command of language to treat the material in a manner that could not be more original and stimulating."—Robert Fink, author of Repeating Ourselves: American Minimal Music as Cultural Practice

In Lieu of a Preface

1. Classical Music and Its Values
2. The Fate of Melody and the Dream of Return
3. Score and Performance, Performance and Film: Classical Music as Liberating Energy
4. But Not for Me: Love Song and the Heartache of Modern Life
5. The Ghost in the Machine: Keyboard Rhapsodies
6. Crisis and Memory: The Music of Lost Time
7. Persephone’s Fiddle: The Value of Classical Music