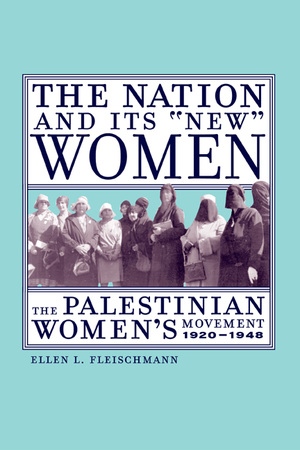 The Nation and Its New Women The Palestinian Women's Movement, 1920-1948

Though they are almost completely absent from the historical record, Palestinian women were extensively involved in the unfolding national struggle in their country during the British mandate period. Led primarily by urban, educated women from the middle and upper classes of Arab society, Palestinian women struggled against British colonialism and against Jewish settlement by holding a national congress, meeting with government officials, smuggling arms, demonstrating, and participating in regional and international conferences. This book is the first comprehensive historical study of the emergence and development of the Palestinian women's movement in this important historical period. Drawing from little-studied source material including oral histories, newspapers, memoirs, and government documents, Ellen Fleischmann not only shows what these women accomplished within the political arena, but also explores the social, cultural, and economic contexts within which they operated. Charting the emergence of an indigenous feminism in Palestine, this work joins efforts to broaden European and American definitions of feminism by incorporating non-Western perspectives.

Ellen L. Fleischmann is Assistant Professor of History at the University of Dayton.

“Excellent. . . an important contribution to this growing literature. . . . This book should be widely read not just by scholars of Palestinian history and women in the Middle East but by all interested in the intersection of nationalism and feminism.”—Margaret L. Meriwether American Historical Review

“A significant contribution that provides both new information and a set of meaningful questions to be pursued further.”—Ylana N. Miller The Historian

"This book is an important effort to tease out women’s political consciousness in a particularly volatile colonial setting. . . . It adopts an explicitly feminist stance in its effort to demonstrate that women were able to assert a certain autonomy despite the repressive aspects of colonial rule and nationalist ideology. It also joins efforts to de-center notions of feminism from European and American experiences by defining an ‘indigenous’ feminism in Palestine. The book’s most outstanding contribution is, perhaps, its use of oral histories to capture a lived reality unrecorded in documents. As a result, this study succeeds admirably in its stated project, the recovery of women’s history in a field that had all but buried it."—Elizabeth Thompson, author of Colonial Citizens: Republican Rights, Paternal Privilege, and Gender in French Syria and Lebanon


"An original piece of scholarship that clearly and consistently departs from past scholarship and points the way toward new frameworks and concepts of analysis."—Julie Peteet, author of Gender in Crisis: Women and the Palestinian Resistance Movement
Read More >