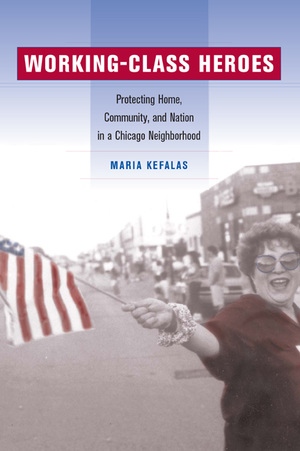 Chicago's Southwest Side is one of the last remaining footholds for the city's white working class, a little-studied and little-understood segment of the American population. This book paints a nuanced and complex portrait of the firefighters, police officers, stay-at-home mothers, and office workers living in the stable working-class community known as Beltway. Building on the classic Chicago School of urban studies and incorporating new perspectives from cultural geography and sociology, Maria Kefalas considers the significance of home, community, and nation for Beltway residents.

“This is rich material for a long-overdue academic engagement with working-class cultural politics.”—Chris Haylett Cultural Geographies

"Scrubbing behind their refrigerators, manicuring their lawns, reciting the pledge of allegiance in rainy parking lots, the people of Beltway mold their community with precision and grace. Firm in their convictions about what makes up a decent place to live, and fierce in their efforts to protect this place from the forces that threaten it, Beltway's residents have found in Kefalas a sharp-eyed yet sympathetic interpreter of their behavior, their homes, and their dreams. Ethnography rarely penetrates this deeply."—Wendy Griswold, author of Bearing Witness

"The perspective of working or lower-middle class whites on issues of race and culture is often ignored, misunderstood or treated with contempt by social scientists. Kefalas's perceptive portrayal and penetrating analysis of a white working-class neighborhood in Chicago provides an important and much needed contrast. In this well-written book, Kefalas advances our understanding of the socioeconomic insecurities of ordinary white Americans in a changing urban world and shows how these insecurities influence their world views and efforts to provide meaning and order in their daily lives."—William Julius Wilson, author of The Bridge over the Racial Divide


"Not since Jonathan Rieder's Canarsie has an urban ethnographer presented as nuanced an examination of the defended working-class neighborhood and its inhabitants. Kefalas's meticulous Chicago fieldwork argues that her subjects rise above the old racial order as they fight against crime and other threats. Working-Class Heroes will provoke endless seminar discussion and debate, and ongoing research. It establishes its author as an important new voice in urban ethnography."—Mitchell Duneier, author of Sidewalk and Slim's Table

"Working Class Heroes is an important and original contribution because it demonstrates very convincingly how the stable white lower-middle class defines its identity and its status through its environment and how group boundaries are shaped by ecological factors. As defenders of civilization living in an imperiled world, the workers Kefalas studied believe an immaculate household, a well-maintained property, a clean and safe neighborhood, and a righteous nation are worth living and fighting for. Her skillful ethnography truly captures the complexity of their cultural world and clarifies neglected aspects of the cultural dimension of inequality."—Michele Lamont, author of The Dignity of Working Men: Morality and the Boundaries of Race, Class, and Immigration