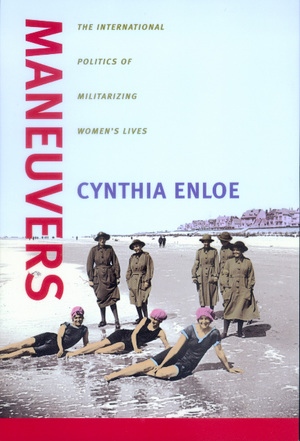 Maneuvers takes readers on a global tour of the sprawling process called "militarization." With her incisive verve and moxie, eminent feminist Cynthia Enloe shows that the people who become militarized are not just the obvious ones—executives and factory floor workers who make fighter planes, land mines, and intercontinental missiles. They are also the employees of food companies, toy companies, clothing companies, film studios, stock brokerages, and advertising agencies. Militarization is never gender-neutral, Enloe claims: It is a personal and political transformation that relies on ideas about femininity and masculinity. Films that equate action with war, condoms that are designed with a camouflage pattern, fashions that celebrate brass buttons and epaulettes, tomato soup that contains pasta shaped like Star Wars weapons—all of these contribute to militaristic values that mold our culture in both war and peace.

Presenting new and groundbreaking material that builds on Enloe's acclaimed work in Does Khaki Become You? and Bananas, Beaches, and Bases, Maneuvers takes an international look at the politics of masculinity, nationalism, and globalization. Enloe ranges widely from Japan to Korea, Serbia, Kosovo, Rwanda, Britain, Israel, the United States, and many points in between. She covers a broad variety of subjects: gays in the military, the history of "camp followers," the politics of women who have sexually serviced male soldiers, married life in the military, military nurses, and the recruitment of women into the military. One chapter titled "When Soldiers Rape" explores the many facets of the issue in countries such as Chile, the Philippines, Okinawa, Rwanda, and the United States.

Enloe outlines the dilemmas feminists around the globe face in trying to craft theories and strategies that support militarized women, locally and internationally, without unwittingly being militarized themselves. She explores the complicated militarized experiences of women as prostitutes, as rape victims, as mothers, as wives, as nurses, and as feminist activists, and she uncovers the "maneuvers" that military officials and their civilian supporters have made in order to ensure that each of these groups of women feel special and separate.

What kind of difference does it make to have women leading the defense industry? On WBEZ’s Worldview, reporter Julian Hayda interviews Cynthia Enloe, renowned for her work on feminist international relations and …

Cynthia Enloe is Professor of Government at Clark University and author of The Morning After: Sexual Politics at the End of the Cold War (California, 1993), Bananas, Beaches and Bases: Making Feminist Sense of International Politics (California, 1990) and Does Khaki Become You? (1988).
Cynthia Enloe won the Howard Zinn Lifetime Achievement in Peace Studies Award from the Peace and Justice Studies Association (PJSA).

"Enloe blends a sharp analytical eye with an attention to real people's lives. She examines the structural forces that militarize our lives, but does not overlook the role of the individual in either advancing or resisting militarization."—Jennifer Turpin, coeditor of The Women and War Reader

"One of the most impressive things about this book is its breadth, and the way in which Enloe runs her thread through so many different issues, so many different women's stories and experiences."—Sandra Whitworth, author of Feminism and International Relations

"Cynthia Enloe here rethinks the global militarization of women's lives that she first confronted in her now-classic Does Khaki Become You? With her customary insight, sensitivity, and eloquence, Enloe helps us to see the connections among diverse groups of women in every corner of the world. If her unravelling of the process of militarization can make frightening reading, at the same time she holds out hope by showing that demilitarization, like its opposite, comes about through concrete acts and decisions."—Leila J. Rupp, author of Worlds of Women

1 How Do They Militarize a Can of Soup?
2 The Laundress, the Soldier, and the State
3 The Prostitute, the Colonel, and the Nationalist
4 When Soldiers Rape
5 If a Woman Is "Married to the Military,"
Who Is the Husband?
6 Nursing the Military: The Imperfect Management
of Respectability
7 Filling the Ranks: Militarizing Women as Mothers,
Soldiers, Feminists, and Fashion Designers 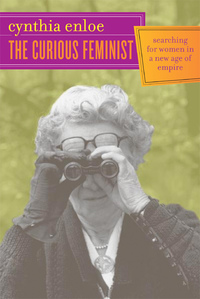 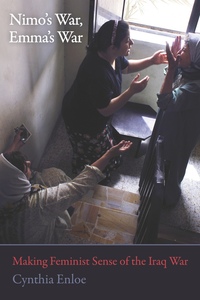 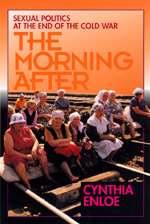