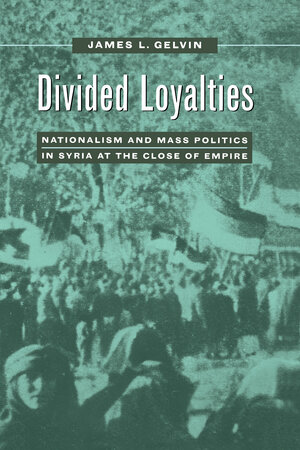 James L. Gelvin brings a new and distinctive perspective to the perennially fascinating topic of nationalism in the Arab Middle East. Unlike previous historians who have focused on the activities and ideas of a small group of elites, Gelvin details the role played by non-elites in nationalist politics during the early part of the twentieth century. Drawing from previously untapped sources, he documents the appearance of a new form of political organization—the popular committee—that sprang up in cities and villages throughout greater Syria in the immediate aftermath of the First World War. These committees empowered a new type of nationalist leadership, made nationalist politics a mass phenomenon for the first time, and articulated a view of nation and nationalism that continues to inform the politics of the region today.

Gelvin does more than recount an episode in the history of nationalism in the Arab Middle East. His examination of leaflets, graffiti, speeches, rumors, and editorials offers fresh insights into the symbolic construction of national communities. His analysis of ceremonies—national celebrations, demonstrations, theater—contributes to our understanding of the emergence of mass politics. By situating his study within a broader historical context, Gelvin has written a book that will be of interest to all who wish to understand nationalism in the region and beyond.

James L. Gelvin is Assistant Professor of History at the University of California, Los Angeles.

"A novel study. Mass politics are central to our century, and Gelvin brings them to life in a readable narrative. This book adds a new dimension to an ongoing and important debate in the field."—Leila Fawaz, author of An Occasion for War