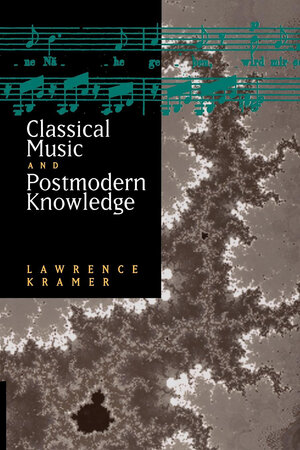 A leading cultural theorist and musicologist opens up new possibilities for understanding mainstream Western art music—the "classical" music composed between the eighteenth and early twentieth centuries that is, for many, losing both its prestige and its appeal. When this music is regarded esoterically, removed from real-world interests, it increasingly sounds more evasive than transcendent. Now Lawrence Kramer shows how classical music can take on new meaning and new life when approached from postmodernist standpoints.

Kramer draws out the musical implications of contemporary efforts to understand reason, language, and subjectivity in relation to concrete human activities rather than to universal principles. Extending the rethinking of musical expression begun in his earlier Music as Cultural Practice, he regards music not only as an object that invites aesthetic reception but also as an activity that vitally shapes the personal, social, and cultural identities of its listeners.

In language accessible to nonspecialists but informative to specialists, Kramer provides an original account of the postmodernist ethos, explains its relationship to music, and explores that relationship in a series of case studies ranging from Haydn and Mendelssohn to Ives and Ravel.

Lawrence Kramer teaches in the Humanities Department at Fordham University, Lincoln Center, and is an active composer. He has published two previous books with California: Music and Poetry: The Nineteenth Century and After (1984) and Music as Cultural Practice (1990). Both are available in paperback.

"In this pathbreaking new book, Lawrence Kramer extends the theoretical and scholarly frontiers of musicology with every chapter, each of which explores a different case study in depth. In short, [he] demonstrates repeatedly that classical music is a far more significant force in history than its champions (who want music to transcend 'mere' social formations) usually allow."—Susan McClary, author of Feminine Endings: Music, Gender, and Sexuality

"Kramer continues his project to steer the criticism of Western art music onto the paths of contemporary intellectual discourse. No one is better equipped for the task: Kramer's range is extraordinary, his scholarship impeccable, his arguments incisive. But above all, his values are humane. He cares passionately about this precious musical heritage, and his commitment can be felt on every page, including the dazzling performative and postmodern epilogue."—Walter Frisch, author of The Early Works of Arnold Schoenberg, 1893-1908

"This book will (I hope) be one of the foundational moments of a thriving and much-needed discourse. Kramer demonstrates the power to interpret that comes with fully integrating up-to-date critical literary theory with musical analysis. The risks he takes are absolutely necessary to our discipline if it is not, along with the music it professes to enshrine, to fade away into total cultural irrelevance and oblivion. Those scholars to whom postmodernism is a liberating and not a frightening concept will welcome this book with uncommon interest."—Robert Fink, founding editor of Repercussions: Critical and Alternative Viewpoints on Music and Scholarship