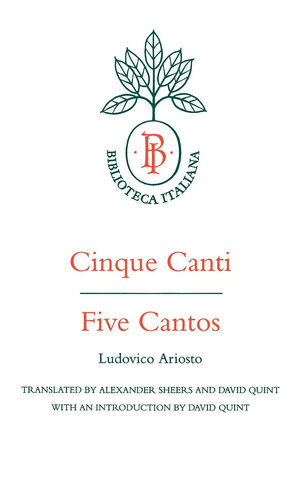 This new translation brings to English-speaking readers an intense and brooding work by the greatest poet of the Italian Renaissance, Ludovico Ariosto. Begun as a sequel to his epic masterpiece Orlando Furioso (1516), the unfinished Cinque Canti are a powerful poem in their own right. Tragic in tone,they depict the disintegration of the chivalric world of Charlemagne and his knights and give poetic expression to a sense of cultural, political, and religious crisis felt in Ariosto's Italy and in early sixteenth-century Europe more generally.

David Quint's introduction freshly examines the literary sources and models of the Cinque Canti and discusses the cultural contexts and historical occasions of the poem. Printed with facing Italian text, this volume allows the modern reader to experience a work of Renaissance literature whose savage beauty still has the power to chill and fascinate.

Alexander Sheers studied comparative literature at the University of Massachusetts and at Princeton University. He now practices law in New York City. David Quint is Professor of English and Comparative Literature at Yale University. His most recent book is Epic and Empire: Politics and Generic Form from Virgil to Milton (1993).

"The Cinque Canti represent an extremely critical period of Italian and European history. This translation is an outstanding achievement. . . . It aims for close fidelity to the original Italian and is highly readable, even elegant."—Albert R. Ascoli, author of Ariosto's Bitter Harmony