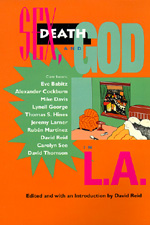 David Reid has gathered together the novelists, journalists, and cultural critics who could best address the myths, define the truths, and interpret the media images of the second largest city in the U.S. They report on the new Latino and Asian populations of South Central and the East Side and the old establishment of the West side; Downtown with its heavily mortgaged office towers held by Canadian and Japanese landlords; shuttered factories and thriving sweatshops; architecture from Irving Gill to Frank O. Gehry; messiahs from Krishnamurti to L. Ron Hubbard; rituals of power in Movieland and yoga and seduction in Beverly Hills. Ranging from acute political commentary to evocative literary impressions, this is a collection that will engage not only those who live in southern California but all those curious about this megalopolis in the desert.

David Reid is a writer living in Berkeley who grew up in southern California and was educated at Claremont-McKenna College and the University of California, Berkeley. He is co-editor, with Leonard Michaels and Raquel Scherr, of West of the West: Imagining California (1991).