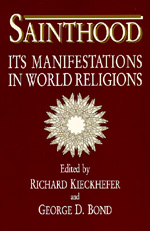 Sainthood Its Manifestations in World Religions

Every major religion exalts certain individuals who occupy a dual role. On the one hand they serve as exemplars of virtue to be imitated, and on the other hand they stand removed from other mortals, privileged and unique. Christianity knows them as saints, and in the study of religion the term has been taken over and applied to similar figures in other traditions. The essays in this volume analyze the role of the saint in Judaism, Christianity, Islam, Hinduism, Buddhism, and Confucianism, providing both a comparative and an interpretive view of sainthood.

The notion of sainthood is problematic in two ways. First, can the category be usefully applied to individuals in religious traditions other than Christianity? How has it manifested itself, and what differences are there in the various manifestations of sainthood? Second, where individuals are considered to have risen above the norms in these different traditions, how is it possible to resolve the tension between the saint's imitability and his or her otherness, between imitating and venerating the saint? The authors consider these questions in relation to a wide range of individuals in all the major traditions.