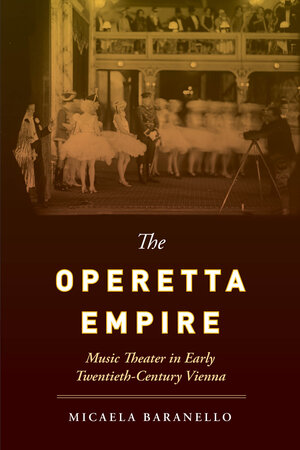 "When the world comes to an end," Viennese writer Karl Kraus lamented in 1908, "all the big city orchestras will still be playing The Merry Widow." Viennese operettas like Franz Lehár's The Merry Widow were preeminent cultural texts during the Austro-Hungarian Empire's final years. Alternately hopeful and nihilistic, operetta staged contemporary debates about gender, nationality, and labor. The Operetta Empire delves into this vibrant theatrical culture, whose creators simultaneously sought the respectability of high art and the popularity of low entertainment. Case studies examine works by Lehár, Emmerich Kálmán, Oscar Straus, and Leo Fall in light of current musicological conversations about hybridity and middlebrow culture. Demonstrating a thorough mastery of the complex early twentieth-century Viennese cultural scene, and a sympathetic and redemptive critique of a neglected popular genre, Micaela Baranello establishes operetta as an important element of Viennese cultural life—one whose transgressions helped define the musical hierarchies of its day.

Micaela Baranello is Assistant Professor of Musicology at the University of Arkansas. Her publications include articles in the Journal of the American Musicological Society, Cambridge Opera Journal, Opera Quarterly, Nineteenth-Century Music Review, and the New York Times.

"Vienna’s 'Silver Age' operetta was simultaneously a successful international culture industry and a distillation of the city's multiethnic local identities, a sentimental escapist entertainment and an increasingly ambitious art. Micaela Baranello captures the glamorous yet contested nature of this long-dismissed genre through a sophisticated explication of the creation and reception of some of twentieth-century Europe's most popular theatrical works."—Lynn M. Hooker, author of Redefining Hungarian Music from Liszt to Bartók

"A pioneering study of twentieth-century Viennese operetta that shows the limits of, and presents a much-needed challenge to, the musicological fixation on high-status musical modernism in Vienna."—Derek B. Scott, author of German Operetta on Broadway and in the West End, 1900–1940

"In this well-researched volume, Baranello celebrates the extraordinary nature and significance of early twentieth-century Viennese operetta, a repertory clearly deserving of such an investigation. Her work is destined to occupy a prominent place in the expanding literature on musical theater in general and operetta in particular."—William A. Everett, author of Sigmund Romberg

Introduction: Operetta in Vienna
1. Die lustige Witwe and the Creation of Silver Age Viennese Operetta
2. Sentimentality, Satire, and Labor
3. Hungary, Vienna, and the "Gypsy Operetta"
4. Operetta and the Great War
5. Exotic Liaisons
6. Operetta in the Past Tense