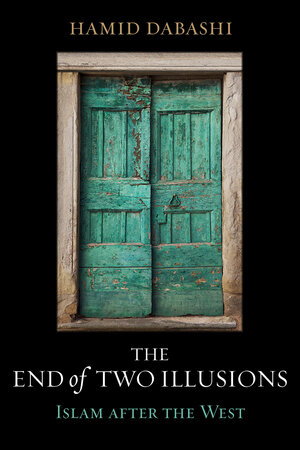 The End of Two Illusions Islam after the West

Dismantling the myths that divide Islam and the West, this cutting-edge work of critical thinking proposes new ways to reread Islamic and world histories.

Extending from the front-page news coverage of our daily lives back into the deepest and most revelatory histories of the last two hundred years and earlier, Hamid Dabashi's The End of Two Illusions is a daring, provocative, and groundbreaking work that dismantles the most dangerous delusions manufactured between two vastly fetishized abstractions: "Islam" and "the West." With this book, Dabashi shows how the civilizational divides imagined between these two cosmic binaries have defined their entanglement—in ways that have nothing to do with the lived experiences of either Muslims or the diverse and changing communities scarcely held together by the myth of "the West."

Through detailed historical and contemporary analysis, The End of Two Illusions untangles the motivations that produced this global fiction. Dabashi demonstrates how "the West" was an ideological commodity and civilizational mantra invented during the European Enlightenment, serving as an epicenter for the rise of globalized capitalist modernity. In turn, Orientalist ideologues went around the world manufacturing equally illusory abstractions in the form of inferior civilizations in India, China, Africa, Latin America, and the Islamic world. The result was the projection of "Islam and the West" as the prototype of a civilizational hostility that has given false explanations and flawed prognoses of our contemporary history, with weaponized Islamophobia on one side and militant Islamism on the other as its most palpable manifestations. Dabashi argues it is long past time to dismantle this dangerous liaison, expose and overcome its perilous delusions, and reimagine the world beyond its shimmering mirage. The End of Two Illusions is the most iconoclastic work of critical thought and scholarship to emerge in recent memory, clearing the way toward a far more liberating imaginative geography of the world we share.

Hamid Dabashi is Hagop Kevorkian Professor of Iranian Studies and Comparative Literature at Columbia University. Among his most recent books are Islamic Liberation Theology: Resisting the Empire; Shi'ism: A Religion of Protest; and Europe and Its Shadows: Coloniality after Empire.

"This book should have been written a long time ago. It is the first bold and incisive deconstruction of the greatest fabricated binary of this century: 'Islam and the West.' This old Orientalist and destructive juxtaposition has survived until today and provided the moral justification for the brutal American assaults on Afghanistan and Iraq. This book offers a different genealogy for the emergence of this constructed binary, positioned one against the other in a poisonous, and artificial, relationship. Hamid Dabashi forcefully challenges this dangerous concept of 'Islam and the West,' offering an alternative de-racialized and humane perspective—visions of the past and future that will be essential for all who are embroiled and affected by this insidious and violent construct. Scholars and the wider audience will find in this book an accessible, honest, and very readable critique of a notion that impacts the lives of so many of us in this century."—Ilan Pappé, Professor of History and Director of the European Centre for Palestine Studies, University of Exeter

"'Islam and the West' is a gnoseological invention (not a 'representation') cast in the binary logic undergirding the idea of Western Civilization. Dabashi's convincing and powerful argument is the call to extricate ourselves from this and all binary illusions that shatter thinking in order to manage subjective and intersubjective relations."—Walter D. Mignolo, author of The Politics of Decolonial Investigations  "Dabashi, with all the erudition of a distinguished scholar, takes on and demolishes a fiction that has long been accepted as truth: that something called the 'West' and 'Islam' actually exist. This book both pushes back against mainstream and right-wing authors and takes on scholarly work that falls into the trap of creating an essentialized West. It then draws on millennia of history to expose the limitations of the 'Islam and the West' framework. This brilliant book is an important intervention at this historical moment when the empire of capital has assumed new forms to legitimate itself."—Deepa Kumar, Professor of Media Studies at Rutgers University and author of Islamophobia and the Politics of Empire: 20 Years after 9/11


"In this gripping text, Dabashi advances a new materialist, post-Saidian perspective to dismantle the ideological foundation of the all-too-familiar binary 'Islam and the West.' The End of Two Illusions is a powerful antidote to Samuel Huntington and the epistemological apparatus of the 'clash of civilizations.'"—Asef Bayat, Bastian Professor of Global and Transnational Studies, University of Illinois at Urbana-Champaign

"Dabashi draws on his probing and erudite oeuvre to chart an emancipatory path beyond the illusory West-Islam binary."—Elizabeth Suzanne Kassab, author of Enlightenment on the Eve of Revolution: The Egyptian and Syrian Debates
Read More >