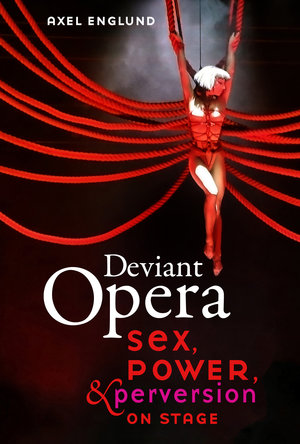 Imagine Armida, Handel’s Saracen sorceress, performing her breakneck coloraturas in a black figure-hugging rubber dress, beating her insubordinate furies into submission with a cane, suspending a captive Rinaldo in chains from the ceiling of her dungeon. Mozart’s peasant girl Zerlina, meanwhile, is tying up and blindfolding her fiancé to seduce him out of his jealousy of Don Giovanni. And how about Wagner’s wizard, Klingsor, ensnaring his choir of flower maidens in elaborate Japanese rope bondage?

#AMSMT20: New and Notable in Musicology

UC Press is thrilled to be publishing a number of new titles groundbreaking books in Musicology. Beethoven, A Lifeby Jan Caeyerstranslated by Brent Annable The authoritative Beethoven biography, endorsed by and produced …

This post is part of our AMS 2020 conference blog series. Check out our virtual exhibit page for more. By Axel Englund, author of Deviant Opera: Sex, Power, and Perversion on Stage The camera …

Axel Englund is Professor of Literature at the Department of Culture and Aesthetics, Stockholm University, and author of Still Songs: Music In and Around the Poetry of Paul Celan.

"An erudite analysis of sadomasochism (SM) in opera."—Opera Now

"Smart, brave, and deeply knowledgeable. Opera criticism does not get better than this."—Lawrence Kramer, author of The Hum of the World: A Philosophy of Listening

Introduction. Staging Deviance
1. Opera and Sadomasochism
2. Sex in Excess: Rinaldo, Alcina, and the Contemporary Baroque
3. Schools of Libertinage: Don Giovanni with Sade
4. In-House Allegories: Enactment and Actuality in Parsifal and Tosca
5. More or Less Human: Wozzeck, Lulu, and the Soprano Conductor
Epilogue. The Actuality Effect and Opera’s Quest for Authenticity